New Zealanders worried by a potential travel pause with Victoria are being told to return now, according to Covid-19 Response Minister Chris Hipkins. 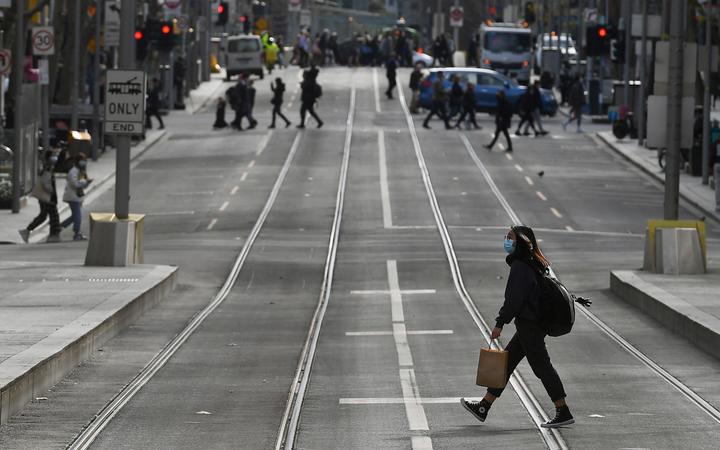 A shopper crosses the street in the central business district in Melbourne, Victoria. Photo: AFP

An unexpected wastewater sample has been detected in the state of Victoria which has increased concern over the extent of Covid-19 community transmission within Victoria, Hipkins said.

Hipkins said if there was more indication of a serious outbreak in Victoria the government would act quickly to put a pause on travel to Victoria.

"It's still early days at this point in terms of these cases but as we know these things can move quite quickly and in the event that the risk profile escalates then New Zealand will look to move quickly," Hipkins said.

NZers in Victoria have been told if they have pressing reasons to return home to New Zealand they need to make preparations now.

"What we've said to New Zealanders over there is if you're there and you're worried that you could be trapped in a pause and you wouldn't able to accommodate that in your plans then you should think about coming home now," Hipkins said.

If travel to Victoria was paused, Hipkins said MIQ facilities would not be made available to repatriate returnees for at least several weeks.

Hipkins said the government would only consider repatriation flights if people are stuck in Victoria for a prolonged amount of time.

In the first instance when a pause was put in place people will have to stay put where they were in Australia.

Meanwhile in New South Wales, Hipkins said it could be weeks or months before everybody there is given the opportunity to get on a flight back to New Zealand.

The lockdown in New South Wales has been extended for two weeks - with Greater Sydney reporting about 100 new community cases each day this week.

According to epidemiologist professor Tony Blakely, a lockdown may not be necessary in Victoria.

"The majority of times contact tracing augmented by mask wearing and physical distancing to squash these outbreaks out, not always there's still a chance that it could take off and you might need a quick lockdown," he said.

Blakely said contact tracing modelling would suggest that any lockdown would be at least several days away.

However, he said New South Wales need to 'go hard' on Covid-19 restrictions if the state is to reduce the infection rate.

"If New Zealand and Victoria get to that 70 percent vaccination, we should be okay with the contact tracing, we can probably open up to a relatively normal situation and have perhaps 100 deaths in the next year, a couple of thousand hospitalisations as the maximum and spend very little time in lockdown.

"Reflecting on New Zealand, I think New Zealand's done well or been lucky or a bit of both, to not have had to use lockdowns for incursions, which inevitably will happen," Blakely said.