There are five new cases of Covid-19 in managed isolation and quarantine facilities (MIQ) reported today.

Earlier today the ministry said another 13 crew from the quarantined fishing vessel Viking Bay had tested positive to Covid-19.

Two crew had previously been reported as confirmed with the virus.

In today's Covid-19 update, the ministry said all 15 affected crew have now been transferred to an onshore quarantine facility in Wellington.

"Five crew members remaining on board to maintain the safety of the vessel have returned negative test results to date. They will be subject to additional testing in coming days.

"The All of Government response team advise that Maritime Safety provided a dispensation to the vessel to have only five crew on board to meet minimum safety requirements. Contingency planning is underway for any further changes in crew numbers."

Crew from another fishing vessel, Playa Zahara, will be tested for Covid-19 in co-ordination with Port Taranaki and the Taranaki District Health Board.

Fifteen of the 18 crew members onboard have experienced a flu-like illness.

The Spanish-flagged shipping vessel is expected to berth at the port today after applying for permission for a change of crew.

"Once testing is complete, the ship will then depart from the onshore quarantine place of inspection and will remain offshore until test results are available tomorrow," the ministry said.

"If the results show there is no evidence of Covid-19 onboard, then the vessel will be granted pratique for a crew change.

"Health authorities have assessed this situation as having a low risk to public health."

"All travellers on these flights will have to go into managed isolation for 14 days when they arrive in New Zealand. Because of this, travellers from NSW will not be required to return a negative pre-departure test before flying.

"Travellers who have been in NSW on or after 10.30pm on 26 June are not permitted to travel back to New Zealand from other parts of Australia. Travel histories will be checked at the airport before flying."

The ministry said travellers from all other parts of Australia - who haven't been in NSW since 26 June - must have returned a negative pre-departure test to be allowed to enter New Zealand.

"All travellers must complete a travel declaration." 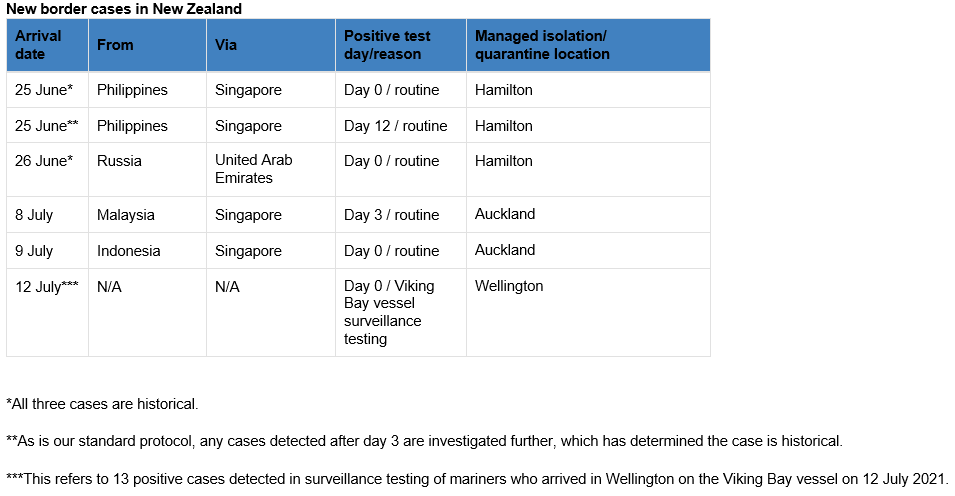 There are 18 cases of Covid-19 to report at the border since the ministry's last update yesterday - five in recent returnees and 13 from the Viking Bay vessel, announced earlier today.

Eight previously reported cases have now recovered and the number of active cases in New Zealand is 43.

The ministry said three previously reported cases, from 25 and 26 June, have now been deemed as historical.

The total number of confirmed cases in NZ is 2430.

And on Monday, 3478 Covid-19 tests were processed across the country.