Two under nines football matches at Ocean Grove Park in Dunedin had to be suspended for a short time on Saturday after a pitch invasion by a sea lion. 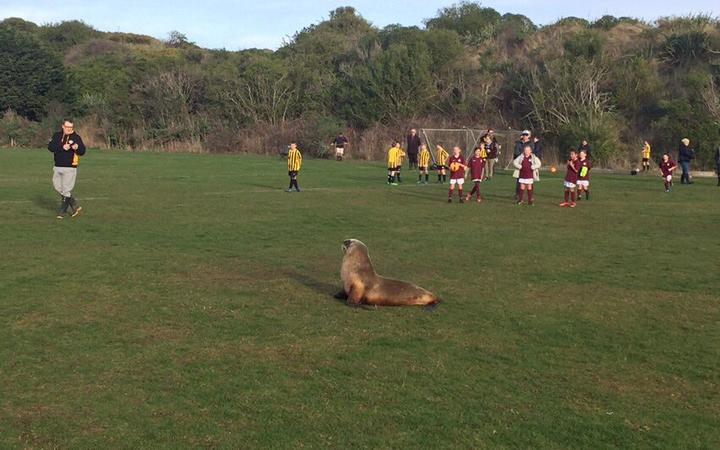 The curious creature, which was initially happy to just watch the matches, eventually tried to join in, causing a temporary halt to play.

Play was able to continue when one game was moved to a neighbouring field.

Undeterred, the creature moved its attentions to the other game happening at the time.

Bradley Scott, who was there watching his daughter, said it looked as if it wanted to join in.

"There were a lot of dog walkers so it had a wee bit of a grump and probably didn't take too kindly to trying to be shifted. I mean it's not the sea lion's fault that we've put a sports ground next to its habitat."

Scott, whose daughter ran from the field when she set eyes on the large animal, said various attempts were made to encourage it to move away while maintaining a safe distance and not harming it.

"A grandfather from one of the other teams grabbed quite a long branch that had leaves on it and sort of shook the leaves at it from a safe sort of distance ... and it would sort of sniff at the leaves and move back and he managed to coax it off."

Dunedin was used to visits from wildlife on its coast.

In January a nearby golf course was chosen by a sea lion as the place it wanted to give birth.