Dairy owners say they risk going out of business if the government pushes ahead with allowing tobacco sales only at pharmacies. 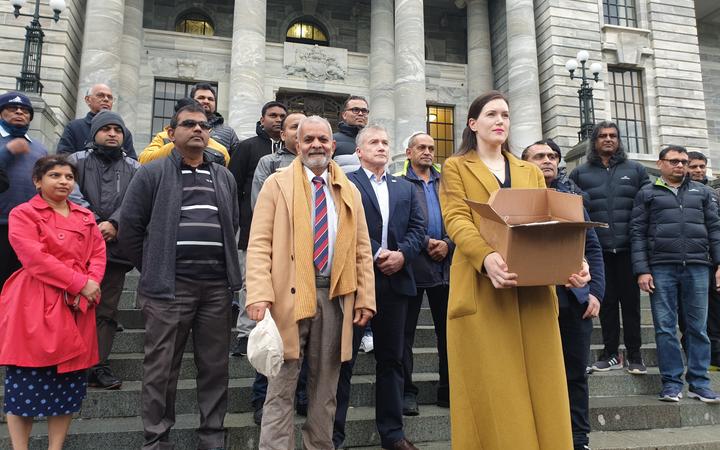 Postcards signed by thousands of dairy owners were delivered to Parliament today, urging the government against the banning of cigarettes being sold from their stores.

The government has proposed allowing only pharmacies to sell tobacco products as part of its plan to make New Zealand smokefree by 2025.

Naginbhai Neil G. Patel has owned his dairy for about 40 years, but he said it would be difficult to stay open if the restrictions went ahead.

"There will be a lot of family unemployed and bankrupt," he said.

Patel said about a third of his income came directly from tobacco sales, but the ban would impact the sale of other goods too.

In addition, van Velden said the black market for cigarettes would grow if taken out of the hands of dairy owners.

Ultimately the change would harm smokers, rather than encourage them to quit, she said.

"We've seen cigarette taxes increase year on year for years and yet there are still New Zealanders who smoke.

"What we are doing by increasing taxes and making it harder for those people who do smoke is putting more cost on our poorest New Zealanders," she said.

Associate Health Minister Dr Ayesha Verrall said while the black market argument was interesting, that had not proven to be the case when tobacco restrictions were brought in overseas.

"We need to look at that with an evidence based perspective," she said.

The postcards were reportedly paid for by a tobacco company, but Dr Verrall was unsurprised.

"We have seen a history of big tobacco bankrolling groups that want to do the tobacco industries' dirty work for them and I'm hugely disappointed about that," she said.

However, she felt there could still be a place for dairies to sell vape products if used as a cessation tool.

"For over 18s there is a role for dairies to sell vaping products," she said.

Overall, she said it was important to take action to make New Zealand smoke-free, with about 5000 people dying from smoking each year.