ACC is biased against women, Māori and Pasifika, a new analysis shows. 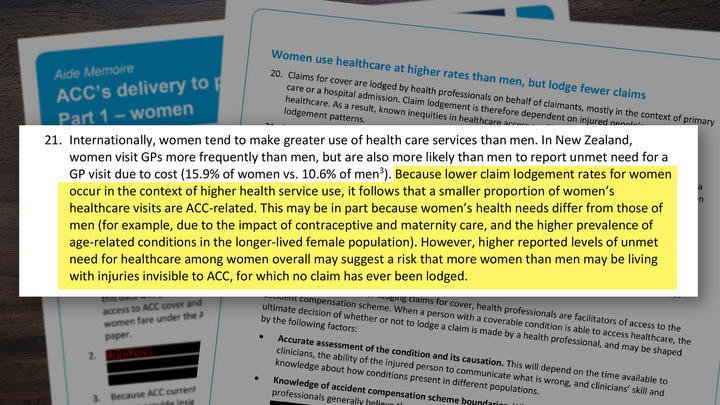 Women are less likely to make ACC claims, more likely to be declined when they do, and they receive far less compensation than men, the figures show.

Over the past five years it has become even harder for women - especially Māori and Pasifika women - to get an ACC claim accepted.

If women did get cover and were entitled to weekly compensation payments, they got a little over half the rate of men.

Despite women, who make up just over half the population, accessing health care more often than men, men filed 4 percent more claims than women.

The inequities are laid out in a series of briefings, obtained by RNZ under the Official Information Act, from ACC to its Minister Carmel Sepuloni, after the corporation analysed claims data between June 2015 and July 2020. 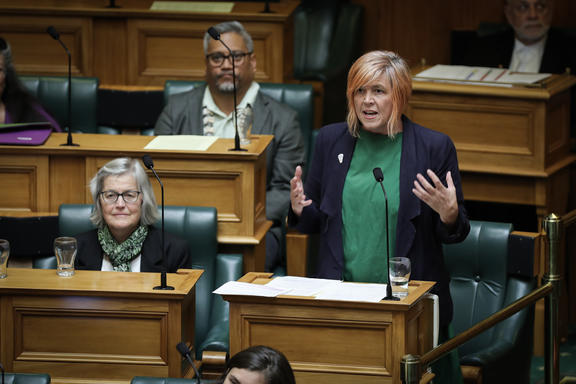 Green Party ACC spokesperson Jan Logie, who has campaigned for successive governments to address inequalities in the scheme, said the biases were inevitable because the Accident Compensation Act, developed in the 1970s, "just hadn't kept up" with changes in society.

"It was developed at a time where mostly it was men going out to work, and doing particular types of work," she said.

As a result, there was a "very strong bias" in favour of working men, she said.

"At the moment, women, Māori and Pasifika are bearing the burden of that failure.

"The outcomes are clearly sexist, and racist. Why somebody thought you could get cover for spraining a muscle on a sports field, but not a birth injury? It's pretty hard to think that there's not some sexism involved in that decision making process."

Urgent change was needed to reduce inequality within the ACC system, she said, starting with birth injuries. 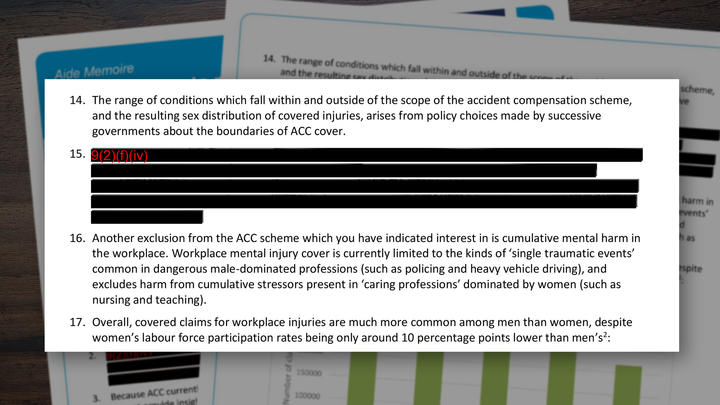 Men are much more likely to make a claim for workplace injuries than women. Photo: RNZ/Vinay Ranchhod

The scheme's definition of "injury" favoured the types of injuries suffered by men, the ACC briefing said, but women and minorities were also more likely to face bias from health professionals who filed claims on their behalf. 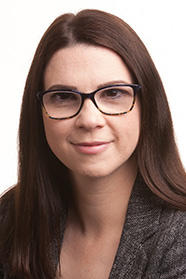 "Research has found that women, indigenous people, and people of colour are all more likely to be seen as exaggerating, malingering or drug-seeking when accessing healthcare," the briefing said.

It was not known whether, or to what extent, these factors influenced claim lodgements rates for women in New Zealand.

Men were more likely to have physical jobs, participate in sports, work in less safe conditions and had higher rates of "hazardous alcohol use" than women.

The types of injuries women were more likely to experience in the workplace were less likely to be covered.

This included a lack of cover for cumulative stressors present in 'caring professions' dominated by women such as nursing and teaching, the paper said.

But simply updating some of the cover tests that determine whether a claim is approved would also reduce inequities, she said.

"Those cover have become narrower and some of them are quite out of date. Some of them reflect medical thinking that's now 50 years old."

Expanding the scheme would cost more, she said. "But I think if we are serious about equity ... we do need to simply accept a wider number of claims, and it will be more expensive."

Despite making up 16 percent of the population, Māori only made up 12 percent of new lodged claims and 15 percent of weekly compensation costs.

The poor claim rates were likely to be "shaped by societal, system and scheme factors" including "racism", the briefing papers said.

In 2017, ACC launched a new strategy, Whāia Te Tika, to reduce inequalities for Māori. But in the three months to December 2020, Māori still had a claim lodgement rate 19 percent lower than the national average.

Other documents released to RNZ show Māori make up just 8.5 percent of ACC employees, which is almost half the percentage of Māori employed in the public sector.

Pasifika return to work faster than all others 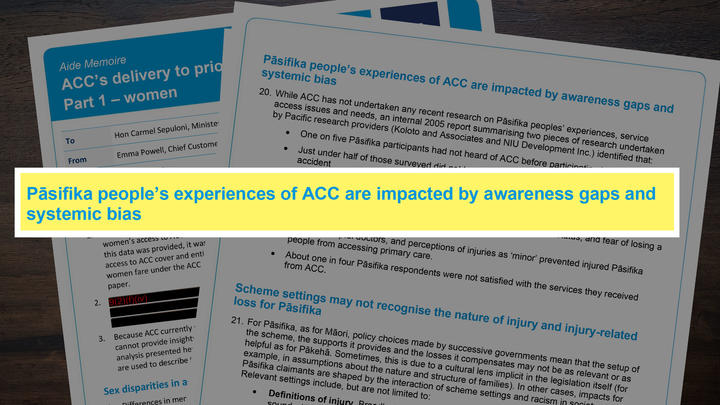 Low claim and acceptance rates for Pasifika were also likely to be "shaped by racism," ACC's briefing papers said.

Despite making up 8 percent of the population, Pasifika accounted for only 6 percent of claims lodged and 5 percent of costs.

Injured Pasifika returned to work faster than any other group, but that could be because they had no choice as lower income households might not be able to afford to live on ACC's 80 percent weekly wage compensation rate.

It has also become harder for Pasifika people to get claims accepted over the last five years. The only time claim acceptance rates rose was between 2013 and 2017 when ACC employed Pasifika kaimahi within its cultural services team.

Auckland University co-head of Māori and Pacific Studies Jemaima Tiatia-Seath said this showed the need for ACC to provide culturally safe services, especially as women were less likely to seek healthcare or help for sexual abuse and domestic violence.

"Language barriers, cost, institutional racism - all those things can be quite daunting if you're someone that's already in a vulnerable position."

ACC Minister Carmel Sepuloni said the data "certainly shows" there is a problem. 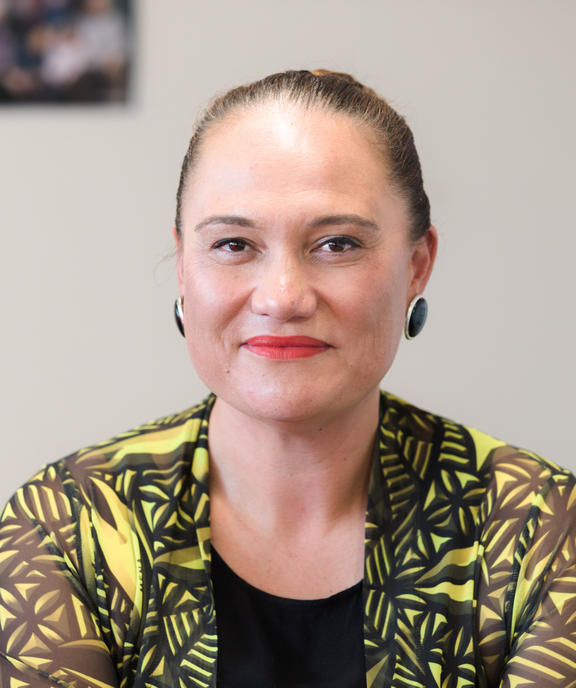 ACC Minister Carmel Sepuloni has asked for advice on what can be done to reduce inequalities for women, Māori and Pasifika. Photo: RNZ / Claire Eastham-Farrelly

But she ruled out a complete overhaul of the ACC legislation or instigating ACC cover for mental injuries suffered by women in the workplace.

"That's not something that's on the table at the moment," she said.

She has asked for advice, however, on policy options and what "could be done operationally" to reduce inequalities for women, Māori and Pasifika.

Addressing the inequities around birth injuries could be first on the cards.

"I've asked MBIE for policy advice on that, and whether or not down the track, we may be able to include that as something that ACC would cover."

She also wanted to find out why fewer women filed sporting and work-related injury claims, and why women had a harder time getting an ACC claim accepted than men.

"We need to look at why that is the case and if there's anything that can be done operationally, to ensure that there's balance there, and that women are getting access to the ACC scheme that is for all New Zealanders."

But the minister wouldn't commit to changes.

"I don't want to over promise and over commit at this stage. We are in the early phases of looking at this information and determining where we might go with it."

ACC declined to be interviewed, but in a statement its chief customer officer Emma Powell said more work was needed to understand the inequities highlighted in the data.

"We also know that differences in experience and access are likely to arise from a broad range of societal, institutional, community and individual factors. We don't have conclusive information on this possible inequality yet so we are taking the time to fully explore this issue."