A bird almost driven off the mainland by introduced pest species is returning to the Waitākere Ranges and other areas, and a conservation biologist credits years of pest control work. 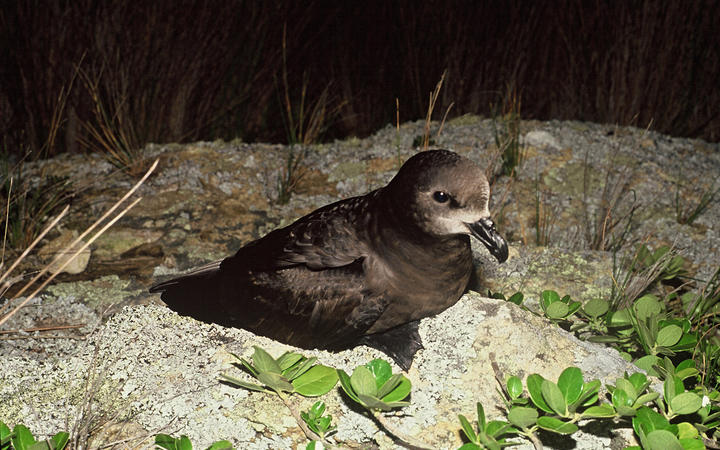 The grey-faced petrel, known as the ōi or northern muttonbird. Photo: Supplied

Professor James Russell of the University of Auckland said viable populations of the grey-faced petrel - the ōi or northern muttonbird - were returning to the mainland.

Historically the species had been found throughout the upper half of the North Island but the birds were relegated to offshore islands due to harvesting and the introduction of predatory mammals.

"Predator Free NZ has really motivated community groups to get into back yard trapping, and as a side effect of that we suddenly realised these grey-faced petrel were coming back to the coast lands of the Waitākere Ranges", Russell said

Colonies of 10 to 40 birds were appearing across headlands where previously one or two birds had been "holding on".

At some of key places like Te Waha in Piha birds were "dripping out of the trees" on autumn nights, he said.

The northern muttonbirds are far from land during the day, feeding off the continental shelf.

At night, the petrel's landing technique is to head to cliff-top trees, crash into them "and then just close their wings", Russell said.

"It's raining birds down on you like it does on offshore islands."

"Lots of these birds are coming back all over the North Island just due to these Predator Free New Zealand efforts. It's really amazing to see how just a little bit of work brings back these seabird species.

"They're not really threatened with extinction, but they're really extinct to us because we don't get the cultural practice of having them in our back yards and seeing them."

The Department of Conservation is reporting the plan to rid New Zealand of rats, stoats and possums by 2050 is well on the way to success.

The Predator Free 2050 5-year Progress Report shows a substantial increase in the areas where predators are suppressed already exceeding the target set for 2025.

Nineteen predator eradication programmes are up and running, and work is under way to remove predators on the mainland without using fences.

On another of the interim goals - ridding one city of stoats and possums - Wellington was well down the track with the Capital Kiwi programme, he said.

"There's an urgency to try to remove these predators because we've got to the point that where we do nothing, where we don't have any predator control, there is just no native wildlife left."

"You've only got to go to one of the offshore islands that's been made predator-free and see the abundance of bird life and lizards that the rationale for this becomes really apparent."

Within five to seven years Beaven expected the technology to be in place to clear large big areas of predators.

The challenge of the 2050 goal was sustaining momentum over that length of time, he said.