By Andrew Marshall of

Residents of a rural Mosgiel road are vowing to fight a more than 130-lot housing development they say will destroy their country lifestyles. 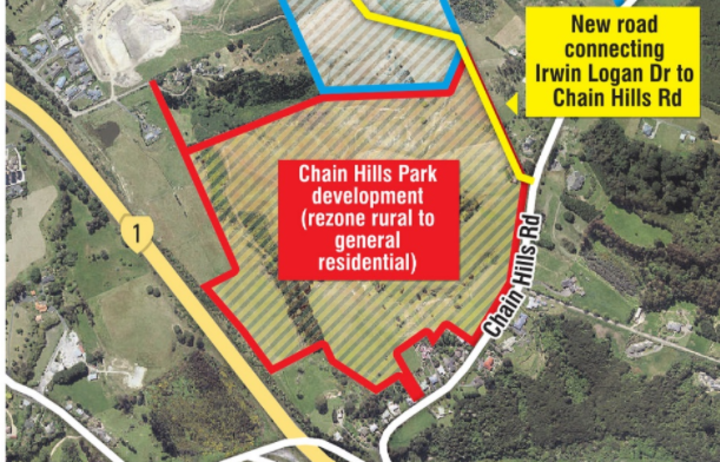 The proposed change to land zoning would allow 130 new houses to be built in a semi-rural area of Mosgiel. Photo: Dunedin City Council

Dunedin City Council is considering changes to its district plan to boost housing capacity in the city.

It received a submission to rezone to general residential a tract of rural residential land on Chain Hills, overlooking Mosgiel, so more houses could be built there.

The submission from the Gladstone Family Trust proposed to open up the area between Chain Hills Rd and Irwin Logan Dr for housing.

A new road is also suggested to connect the two roads.

Rezoning the land would mean a higher density of housing could be built in the area - 56 lots on one section of Chain Hills Rd and a total of 136 lots across the entire development.

Chain Hills Rd resident Gordon Hunt said the proposal had come "out of the blue". Houses within 50m of the potential development had been notified of the possible changes late last week.

The news came in a letter from the council which said affected parties had two weeks to register their opposition.

Resident Pam Jemmett said she had lived in Chain Hills Rd with her husband for 21 years but if the rezoning was successful, moving away would be a consideration.

A development behind their property would change their lifestyle.

"My husband recently had a stroke, so ... the idea of just sitting out looking at the view is going to be gone for him."

Resident Shay van der Hurk said the proposed new road would increase traffic past his property and drivers were likely to use the route as a shortcut into Mosgiel.

At present, Chain Hills Rd is a no-exit road.

The rural nature of the area was a big part of the appeal when he moved in two years ago, van der Hurk said.

Resident Bronwyn Hughes said her house was above the proposed development, and she was worried that earthworks could damage her home.

In its submission to the council, the Gladstone trust said the proposal provided a logical extension of Mosgiel and provided a rare opportunity for "higher density affordable housing with outstanding views".