Fonterra is preparing to truck supplies down the West Coast from tomorrow morning to ensure southerners don't miss out on their milk. 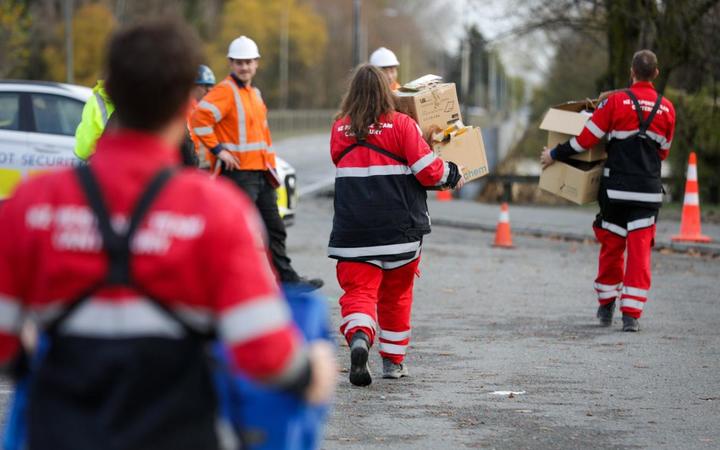 Countdown and Foodstuffs supermarket chains confirmed the road closures would impact lower South Island deliveries and they were working to find alternative routes, but that could mean significant diversions and delays for delivery trucks.

Usually Fonterra would truck their milk to the lower South Island daily. They managed to get through before the floodwaters settled in on Sunday, but that was their last delivery.

Fonterra South Island foodstuffs business manager James Howden said that created a bit of a supply buffer, but they had to come up with a plan to get their milk south.

"At the moment, plan A is we're trucking via the West Coast. It's a very long route down there, but it's the only route available to us at the moment. We're hopeful that the situation will improve in the next day or two, but we're just monitoring the situation," he said.

"Our main priority is to get Anchor milk to customers down south."

The two large trucks will deliver to Fonterra's southern hubs before their franchisee network shares it out to cafes, fuel stations, supermarkets and dairies.

He was hopeful they would be able to use a shorter alternative route south before the long weekend, but said they would still be delivering their milk daily if that did not happen, it would just be a far longer route.

Tinwald Supervalue is only a kilometre or two from central Ashburton, but with the bridge out of action co-owner Gaylene Thompson was cut off from supplies from the north.

"We are currently the only grocery supermarket for everything between Ashburton Bridge and Hinds so we're tight on stock. Customers have been very patient and we thank them for that, that they are buying what they need. We have managed to get bread from Dunedin ... we have got some milk and then our suppliers are all in the background working out what they can get through, what roads and when, so we're just hanging in there in the meantime," she said.

Further south in Invercargill, The Batch co-owner Kate French was expecting to feel the pinch from supplies soon.

Some of the cafe's staples, including dairy, bread for sandwiches and coffee beans, all come through Christchurch.

"We try to buy as locally as possible, but no doubt there will be produce that will be wiped out by the floods that's not going to get harvested and that will have a downstream effect as well so we're starting to see it today and I think we'll start to see it for the next few days while that road's shut. But then we always see a downstream impact to damaged produce at some point whether it's a price increase because it's wiped out a portion of the available market," French said.

Her coffee supplier has flagged a possible freight flight from Christchurch to Dunedin to jump over the floods and road freighting from there.

Other Invercargill businesses were feeling the pressure, she said.

"I've talked to a neighbouring company today. Toners for printers and things - they're all running thin and rationing stock and things like that," she said.

"It's not just the food industry and produce that's been impacted. It's absolutely everyone that's relying on distribution from central warehousing so it's going to be right across the board and we're going to see some fairly empty shops, I think, in the next few days."

While it was not ideal heading into a long weekend with uncertain deliveries, French was taking it in her stride.

"It's nature. You can't do anything about it, can you, so you've just got to be resourceful and problem solve and muddle on through.

"We've got an awesome community so we know that everyone will be really understanding if we're low on stock ... we know our customers are fairly loyal and they'll work with us through that. We've just got to get a bit crafty and find some solutions."

Raeward Fresh Queenstown had not received any new supplies including fresh produce, groceries, fresh fish and flowers since Monday morning.

Its owner operator Nathan Imlach said they were doing well so far.

"There's a few gaps in our produce department but we've been drawing from other areas where we can so locally and obviously from Invercargill.

"We're doing the best to keep our shelves stocked and we carry quite a lot of groceries anyway so we've got backup supplies there."

With work under way to create the alternative access route by the end of today, businesses remained hopeful they would have a shorter, reliable supply route before the long weekend.