There have been more than 240 evacuations in the Waimakariri district tonight. 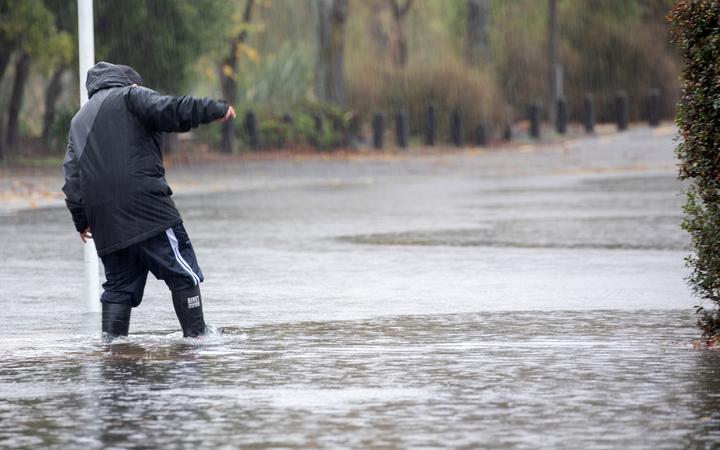 A man walks though floodwaters in Christchurch during a regional emergency caused by two days of heavy rain. Photo: 2021 Getty Images

Earlier, the Waimakariri District Council warned stopbanks along the Eyre River, north of Rangiora, were expected to fail.

One hundred and thirty-three people were evacuated there.

Another 100 people living near the Ashley River, near another risky stopbank, have also left their homes.

A map of the affected area. Photo: Waimakariri District Council

Eight households near Kairaki Beach are also being evacuated.

It comes as a region-wide state of emergency has been declared as rain continues to pound Canterbury - amid fears thousands of homes may need to be evacuated.

The biggest concern is the Ashburton River - and the authorities have been working on an evacuation plan for up to 4000 homes by the Ashburton river.

Acting Minister for Emergency Management Kris Faafoi says while authorities were keeping an eye on multiple rivers in the area, the Ashburton River is the main concern and 3000 homes are at risk.

Where to go for official updates:

Remember, always call 111 if you think your life or the lives of others are in danger.

If you have witnessed flooding and would like to share pictures or video with us, please email it to: iwitness@radionz.co.nz

Look back at what unfolded on Sunday with RNZ's live blog: