A new breast cancer screening system is seen as a step forward in the early detection of the disease, but the Breast Cancer Foundation says it's not enough. 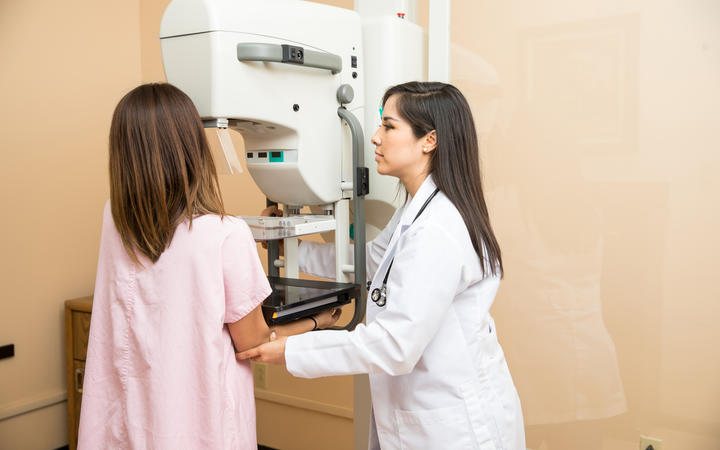 The Breast Cancer Foundation says the age up to which women get invitations to be screened should also be increased (File image). Photo: 123RF

The new system, announced by the government yesterday, will proactively identify and enrol eligible women who are not in the screening programme, so they can get an invitation to do a check-up.

Breast Cancer Foundation research and advocacy manager Adele Gautier told Morning Report it will replace the existing "opt-in" system, where women choose to enrol for breast screening via their GP or by calling an 0800 number themselves.

"Once a woman turns 45, the system will be notified and she will be invited to attend a mammogram.

"We know at the moment 30 percent of the eligible population don't get their screening mammogram through Breast Cancer Aotearoa, so I'm a little surprised at the number the minister put out - it seems higher than I would've expected.

"However, it certainly does mean 200,000 women who will be invited automatically to get their mammograms so we'll have a much better idea of whether those women are getting screened or not."

Each year in New Zealand, about 3200 people are diagnosed with breast cancer and there are about 600 deaths.

The national breast screening programme, BreastScreen Aotearoa, provides free mammography screening every two years to women aged 45 to 69 who have no symptoms of breast cancer.

The government will also invest up to $55.6 million in a major upgrade of the technology, with another $10m earmarked to match population growth and catch up on breast screens missed due to Covid-19 lockdowns.

Gautier said the critical investment was welcomed, but there was more to be done to ensure those getting screened did return.

"That's where there's a need to say well this is a fantastic first move for the screening system, but how are we going to make screening more flexible? How are we going to take advantage of new technology and innovation and actually ramp up capacity to make sure that once those women are registered that getting a mammogram is as easy for them as going to the dairy to get a bottle of milk."

Mobile screening and faster access was a part of the solution, she said.

Gautier said New Zealand was falling behind because of the cut-off age of 69, with other european countries extending out their screening programmes to the age of 73 or 74.

"In our system that's only two extra mammograms for women who are already enrolled, so we see it as a small but urgent need to add or keep those women in the system, because we know that mammograms do save lives for women in their early 70s. The science is there, we should be doing it right now."