The widow of the man shot dead at the Red Fox Tavern more than 30 years ago says the sentencing of the two men responsible for the crime brings a sense of relief and justice. 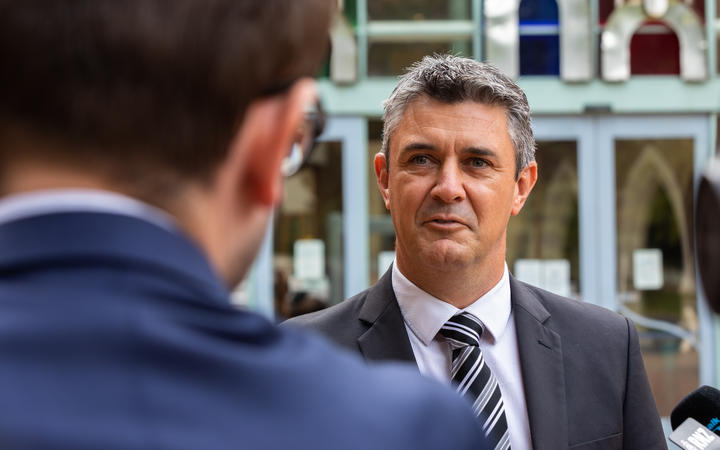 Detective Senior Sergeant Mike Hayward said the Bush family had been patient as they waited for the men responsible for the killing to be held to account. Photo: RNZ/Dan Cook

In the High Court at Auckland this morning Mark Hoggart and another man with name suppression were jailed for life for Bush's murder.

They will be eligible for parole after serving 10 years of their sentence.

In a statement released by police, Bush's widow Gaye said "having some closure after all these years brings about a sense of relief and justice for the family".

She thanked the current and former police staff who had been involved in the investigations for their dedication and compassion over the decades.

"It is now time to move forward and put this painful chapter behind us," she said.

Detective Senior Sergeant Mike Hayward said the Bush family had been patient as they waited for the men responsible for the killing to be held to account.

"No family should have to endure 33 years to wait for justice," he said.

"And certainly a case that has been in the public eye for so long as well, the result today for them is just immense."

It had been extremely traumatic for the three bar staff, who were there the night Bush was killed, Hayward said.

"As it was said in the hearing, this doesn't happen in Maramarua, a rural tavern in New Zealand, and to have something like this occur, it completely shook their world."

Hayward hoped the wider Maramarua community would also feel a sense of closure.

"It's no longer a town of an unsolved homicide," he said.

Hayward became involved in the case in 2016, when the late Detective Inspector Gary Lendrum called him into his office and told him he was going to reinvestigate Bush's homicide, as the 30-year anniversary approached.

Hayward and five other officers started the job by going through about 13 boxes of old files - which converted to around 100 lever arch files, he said.

"As well as the initial investigation, there were over 250 alternative suspects that were also nominated for this offence, so working through all of those and all of that material, it was certainly time consuming," he said.

Lendrum died in December, not long before Hoggart and the man with name suppression went to trial in the High Court at Auckland.

"It was through his leadership and direction that this case was reinvestigated and the results achieved today are purely down to him," Hayward said.