Private security company Cityguard has admitted its staff photograph children as well as anyone else involved in incidents they intervene in while on patrol. 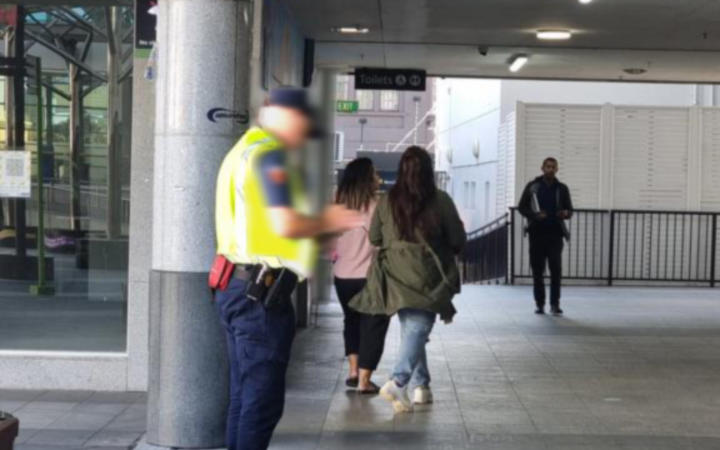 The security guard who took the photos. Cityguard's managing director Ian Crawford said it was routine for security guards to take photographs of members of the public. Photo: Supplied

Cityguard's admission comes after an Auckland woman reported seeing a security guard photographing a group of young children outside the Newmarket Train Station earlier this week.

The woman, who RNZ has agreed not to name, saw the guard pull out his cellphone and slowly approach the group.

"There might have been about 10 of them and they were young, younger than 10, I reckon. There were mainly boys and a couple of girls, and a couple of them had skateboards, but I didn't see any of them skating," she said.

"At first I was like, surely he's not taking photos of them, and then I stopped in the middle of the pathway and watched him.

"I was just shocked that anyone would be so brazen about it. I couldn't believe that he was so okay with what he was doing and he didn't think anyone else would have an issue with it. And to do it so clearly and so publicly, that was very shocking to me."

The children were unsupervised and she did not see the officer ask for their consent, she said.

It looked like the security guard was trying to intimidate them, and the children immediately walked away and out of the station when they saw he was photographing them, she said.

"The way he was walking and the way he walked up to them looked like he was peacocking and trying to show them that this was his space and that he could do whatever he wanted. He was very confidently walking up to them, with his shoulders back, it was very strange."

The woman took a photograph of the security officer and posted it to social media to air her concern.

Cityguard's managing director Ian Crawford did not respond to RNZ's requests for an interview.

But in a written statement, he said the guard was asking a young person to stop skateboarding through the area he was patrolling.

It was routine for security guards to take photographs of members of the public, he said.

"It is our standard practice to take a photograph to document all interventions our guards make for their reports, so that we can monitor and analyse the number, range and nature of events that require action to ensure that we continue to provide the right kind and level of service," he said.

"It is relatively uncommon for children to be the subject of interventions by our guards, but nonetheless any images are treated in the strictest of confidence and not shared beyond the guard involved and that guard's direct manager. These images are routinely deleted after a three-month timeframe."

The security company has previously been contracted to work at events in public areas in downtown Auckland, including Queen's Wharf, the Viaduct and Wynyard Quarter.

Cityguard patrol areas around the Newmarket train station for L & Y Holdings. The company has not responded to RNZ's request for comment.

L & Y Holdings hired Cityguard after the Newmarket Business Association ended its contract with the security company in February.

The business association's chief executive, Mark Knoff-Thomas, said it was not unusual for security guards to photograph children if they had reasonable grounds to suspect criminal behaviour.

"We had a situation recently where some school-aged children were behaving quite badly near some retailers and the guard saw fit to take some photographs of the school aged children, and one of the youths was seen to be carrying a weapon.

"So I think there is justification if the guard suspects there is something happening which may be of a criminal nature."

But he was not sure photographing a child for skateboarding was justified.

"I think guards have to use their discretion to make decisions about what they're doing in the heat of the moment and if it's a child skateboarding around the square innocently well then that probably wouldn't justify that, but it may be more than that and it's hard to say without knowing the report."

The Office of the Privacy Commissioner said in a statement it encouraged anyone who was concerned or affected by such practices to take their concerns up with Cityguard in the first instance, and if they are unsatisfied with the response, to then go to the commissioner.

It said people were entitled to ask for access to any information held about them, including photographs.

Wellington lawyer Amanda Hill, who specialises in privacy issues, said there appeared to be no lawful basis to taking the photo and may be a breach of the Privacy Act.

"It does appear to be a way in which a person wearing a uniform tries to deter people from being on their patch, from things that seem to be annoying or disruptive," Hill told Morning Report.

"If you're in the public area you have a lower expectation of privacy ... you are going to get caught up in, say, scenery photographs. But a person walking up to you, putting a phone in your face and taking your photo, that's quite a different scenario."

The Privacy Act specified particular care must be taken with children and young people when collecting their information, she said.