A bubble, a band and a public holiday provided a cash-fuelled weekend for some tourist operators in major centres. 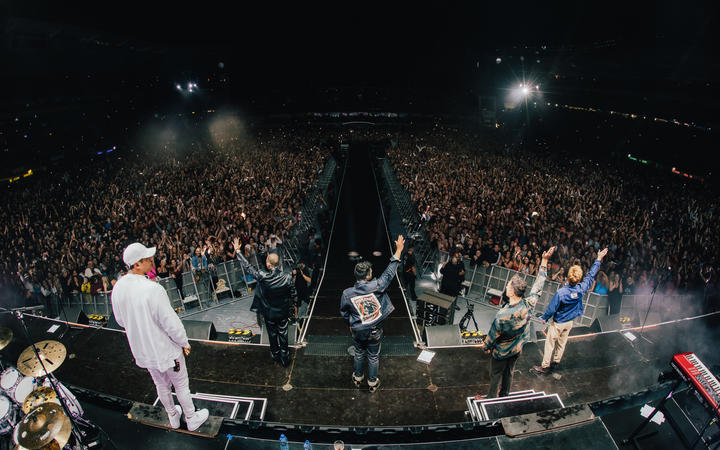 Six60 waving to fans from the stage at Eden Park. Photo: Supplied/Six60

It was the first weekend since the trans-Tasman bubble opened, bringing the first visitors from outside New Zealand in more than a year.

RNZ's Music 101 host Charlotte Ryan was one of the 50,000 people at Eden Park on Saturday night to watch Six60 and other acts, and described it as "a real 'pinch-yourself' moment in this Covid time".

Last night at Eden Park - @SIX60 entering from the rugby changing rooms through the crowd to loud drums and cheers pic.twitter.com/QTIzao0TVs

The show was Auckland's largest event since the trans-Tasman bubble opened and businesses welcomed the influx with open arms.

For Auckland hotelier Desmond Moraes, the culmination of the band and the bubble meant all 45 rooms in his central Parkside Hotel and Apartments were full on Saturday.

"I think 90 percent were people from Auckland wanting to stay in town and go and have a party. I saw lots of girls coming together and booking two or three rooms.

"But we did notice a lot of Australian families checking in as well."

Two days after the borders opened - the hotel's receptionist couldn't keep up with calls, he said.

Because of the demand the hotel is looking to hire up to 10 more staff - between six and eight housekeepers, a housekeeping assistant manager and a night manager.

It was promising to see bookings pick up for the hotel's conference rooms too, Moraes said.

"I feel it's probably because of the borders opening causing a bit more confidence in corporate business as well. We've already received a conference booking from Australia and we're getting a lot of repeat clients.

"The [bubble] date was announced and we started receiving a lot of enquiries."

Tourism operators elsewhere were also beginning to feel the love.

Rotorua Canopy Tours general manager Paul Button said business ramped up so much over the long weekend he had to turn people away.

Guides take tourists high into the Mamaku forest where they can zipline "like the monkeys", he said.

He ran between 15 and 18 tours each day over the long weekend, up from about 12 the weekend before.

"The weekend's been incredible. We've had amazing support from ah, New Zealanders."

But that's the thing, he said. Save for a couple of Australians, most of the swinging punters were from New Zealand. And despite the pain of turning people away, Button said it was too early to ramp up capacity.

"The challenging thing is we know we've turned away a lot of people because they couldn't get space.

"But we're in a position where we can't over-invest into our offerings, because if the numbers don't come or the bubble collapses, we just can't carry that expense. We learned that lesson in March and April last year." 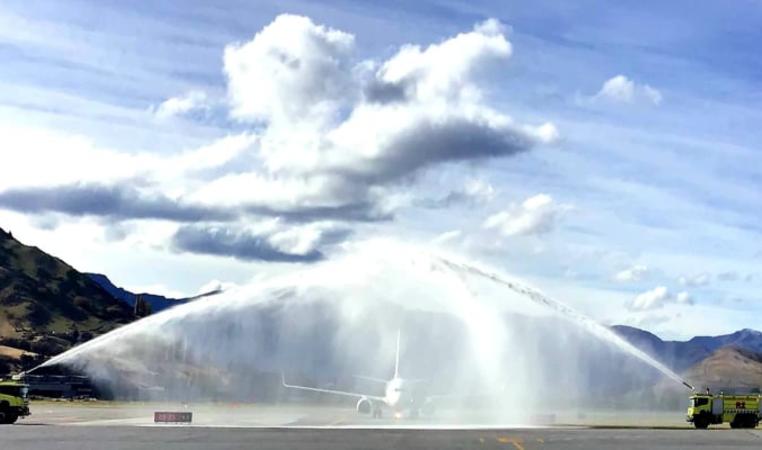 The first quarantine-free flight into Queenstown goes through the water arch - a salute to welcome the special visitors Photo: RNZ/ Belinda McCammon

In Queenstown, 18 flights from Australia landed in the seven days to Sunday, 25 April, Queenstown Airport said.

But Mark Quickfall, who owns Totally Tourism, said he was yet to see the influx on the ground.

"We have noticed, at some of our bases, Australian holidaymakers already arriving, but it is early days. But what is promising is we're getting a lot of bookings for heli-skiing and different activities come the winter season in July and August."

He said he could understand why some travellers would be tentative to head overseas at the moment.

"There's still issues globally so I think people will still have a level of concern that they don't get caught up in a lockdown somewhere. But I think as time goes on people will have more confidence and we'll see more people commit to coming here on holiday."

Schools are off in New Zealand for another week and Australia's school holidays kick in after that, followed by the next long weekend - Queen's Birthday - at the beginning of June.