Reporters finally have a nice day

On Monday, New Zealanders tuning into the news witnessed something rare: bulletins filled almost entirely with joy, relief, and even a bit of singing. It was a welcome respite not just for the people who watched and read the news, but for those that reported it. 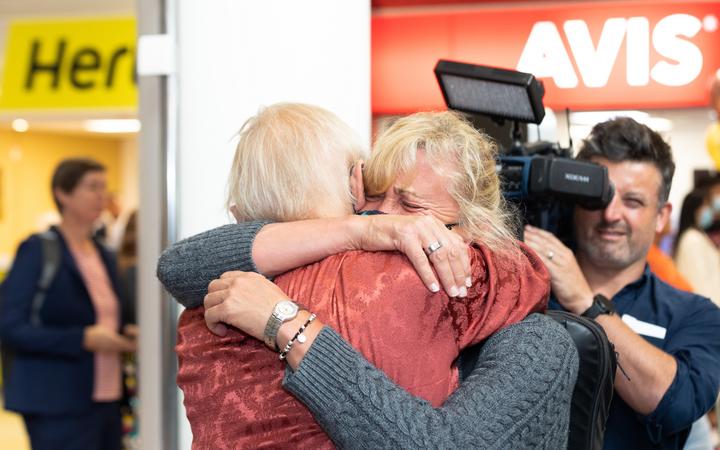 A passenger on the first quarantine-free flight into Auckland embraces with a loved one Photo: RNZ/ Dan Cook

The last year has gone by in a hail of bad news.

There have been terrorist attacks, mass shootings, and insurrections. Most of all there’s been a pandemic sweeping the globe, causing countless deaths, and endless misery.

So it was something of a shock to switch on the news on Monday night, and see bulletins bursting with joy, disgorging themselves of raw happiness and relief.

On 1 News and Newshub, grandparents were meeting their mokopuna for the first time. Children were getting long-awaited hugs from their dads.

Even duty free shop owners were lighting up with excitement, at the prospect of seeing an actual customer or two.

The day wasn’t just joyful though. It was also weird.

At Melbourne Airport, a troupe of what looked like mimes danced around carrying clear balloons, in an interpretive dance aimed at demonstrating the importance of the bubble. 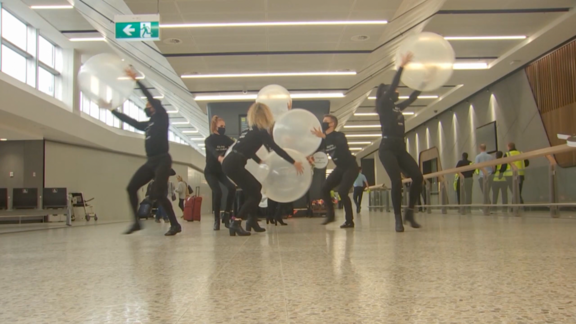 Meanwhile in New Zealand, all the emotional reunions were happening against the backdrop of classic songs.

In Auckland, a choir sang Welcome Home as each plane arrived.

The Spinoff’s Stewart Sowman-Lund was stationed at the airport, and catalogued his mental descent as he listened to Dobbyn’s 2006 hit dozens of times in a row.

"We’re into the 25th minute of a constant performance of Dave Dobbyn’s Welcome Home as the first arrivals from Jetstar flight JQ201 step into the Auckland International Airport arrivals area."

An hour later, he issued the following update.

"The marathon performance of Welcome Home has wrapped after a ‘tight’ 60 minutes as the final arrivals from JQ201 enter the terminal."

Before finally, he gave one final entry:

At least he wasn’t in Queenstown, where passengers emerged red-eyed and blinking to a full band playing Men At Work's 1980 hit 'Down Under'.

Other Aussie arrivals were accosted with the chorus line ‘take me to the April sun in Cuba’, which seemed ambitious given how much effort had gone into just getting them to the southern tourist town.

Overall though, the day of reunions was a breath of fresh air in a year that’s had a lot more downs than ups.

That didn’t just go for people who watch and read the news, but for those that report it.

AAP reporter Ben McKay was stationed at Wellington Airport for the day, and says it was one of the most "joyful, enriching" stories he's reported during his two-year stint in New Zealand.

McKay is Australian, and doubted the travel bubble would open after Labour won a decisive election mandate on the back of its cautious Covid strategy.

"I realised I had a bit to process. I’d been unable to go home for over a year, trapped in my paradise prison. And now, I could. No question it fed into my reporting," he says.

oh my god today has been so great pic.twitter.com/jCWWYTRnn2

Many of his interviews from the day were emotional.

"I was a bit of an unprofessional mess," McKay says. "But the episode feeds one of my beliefs as a journalist, that no one is unbiased; we carry our experiences into each situation and we shouldn’t pretend otherwise. I try to lean into my gut feeling for stories and angles. My gut was telling me this was a day to wallow in the emotion."

For a day, it felt New Zealand was healing. Things were looking up. We had our Australian cousins back.

Then, 24 hours later, we had Covid-19 back in the country, with the announcement a border worker had tested positive.

Still, most of us - including journalists - were just happy to get a little bit of time off the pandemic.

Hopefully one day soon, that respite will last longer than 24 hours.