The Employment Court has told NZ Bus to let drivers back into work, following a lockout notice served on Thursday. However, the company is not ruling out further industrial action. 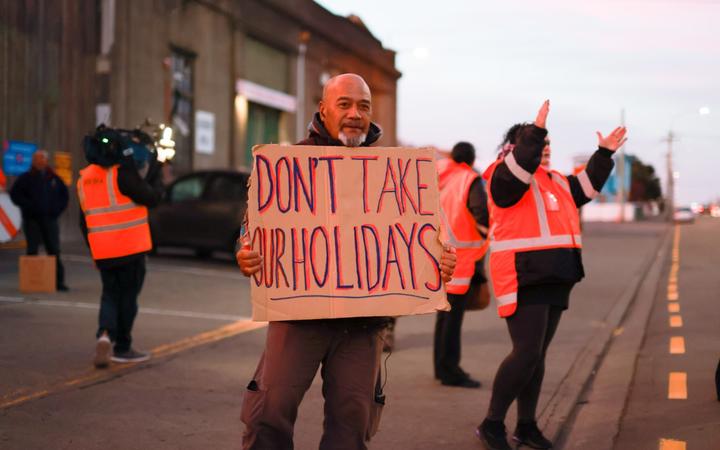 About 100 NZ Bus employees in Wellington walked off the job yesterday, in what was supposed to be a one-day strike following a breakdown in pay negotiations.

But their employer retaliated with a lockout notice, and the union applied to the court for an injunction.

After a day in court today the Council of Trade Unions said the decision was a huge relief for drivers.

The Greater Wellington Regional Council has also welcomed the decision.

NZ Bus said it will accept the lockout ruling, however, if progress is not made at upcoming mediation talks it will not rule out the prospect of taking further action.

Judge Bruce Corkill said he was satisfied the plaintiffs had, on an interim basis, an arguable case that the lockout notices did not comply with relevant provisions of the Employment Relations Act.

"The form of the order will be that until further order of the court, the defendants are prohibited from locking out employees in reliance on the two notices served by the defendants dated 22 April 2021.

"I was advised that were the court to reach this conclusion, the defendants will use their best endeavours to comply with the court's judgement at the earliest opportunity.

"I am told that services that might be provided tomorrow may be incomplete and uncertain, and that normal services will resume on Monday."

NZ Bus has since announced that it is aiming to resume services from tomorrow.

As well, Wellington's public transport operator, Metlink, has confirmed full bus services will resume tomorrow, saying that services that had been cancelled, will now be running.

Today's judgement said both parties had been invited to a private mediation service next week.

"I strongly urge them to engage in that process in good faith."

Judge Corkill said the interests of the public were taken into account when making his decision.

Council of Trade Unions president Richard Wagstaff said NZ Bus was "hoping to starve the bus drivers into submission with this lockout, but this decision has for now stopped them in their tracks".

"We still need sanity to prevail and for NZ Bus to accept the offer by the council to fund an increase in base rates, leave the other important protections alone, and settle a new collective agreement."

NZ Bus said it acknowledged that a substantive hearing about the collective agreement will get underway in the week beginning 3 May.

The company will again participate in mediation next week in the hope of resolving the dispute.

"NZ Bus cannot rule out further industrial action in the future should significant progress not be made during the mediation next week," the company said in a statement.

The Greater Wellington Regional Council is calling the court ruling a victory for common sense.

Its chair Daran Ponter said the decision will pave the way for more positive negotiations in the coming weeks without leaving thousands of Wellingtonians in the lurch.

The general manager of the council's transport arm, Scott Gallacher, said it provides relief for passengers who could have been seriously impacted by ongoing lockouts.

He said passengers can now be assured drivers will be reporting for duty and transport services will be back in action.