Tests on truck handbrakes have found high rates of failure, and concluded the way the brakes are routinely checked is ineffective. 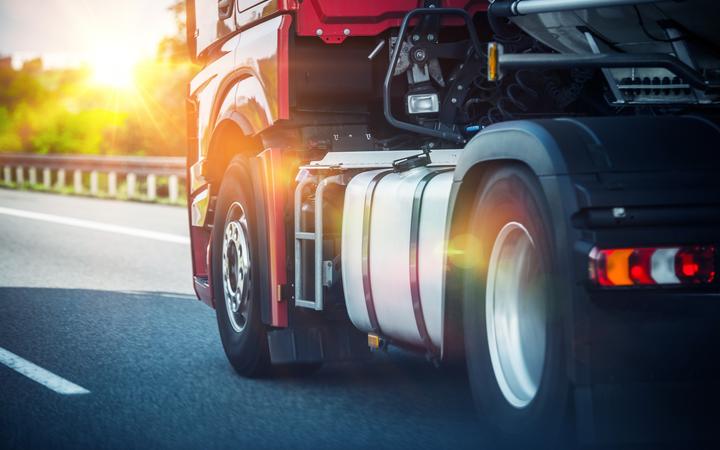 The tests were triggered by three people being killed in the last four years when a common handbrake in heavy vehicles failed.

The cardan shaft or transmission brakes are fitted to at least 55,000 vehicles, mostly trucks, but also construction equipment.

The tests on 90 trucks near Wellington last September found almost half had handbrakes in poor condition.

Eighty percent had handbrakes with too little holding power to pass a test specially designed to be tougher than the routine Certificate of Fitness (CoF) inspections trucks go through (similar to car Warrant of Fitness inspections).

Testers estimated the proportion of trucks "in the fleet" which would roll away is 13 percent - or one in eight.

Waka Kotahi / NZ Transport Agency (NZTA) has not yet released the test report but RNZ obtained it from another source.

But these same trucks had passed routine tests to get their Certificates of Fitness.

The routine test involves stalling the truck. This is the easiest test to perform, even though it does not work properly on the minority of trucks with automatic or automated manual transmissions.

The researchers developed a tougher pull test to meet "the full intent of the heavy vehicle braking standards".

But inspection stations do not have the equipment to do a pull test, or even, in most cases to put a truck on a real slope of 18 degrees to test the handbrake, which is the other option.

The report called into question the handbrake testing regime.

"The key findings of this report show a distinct difference between a stall test and a pull test to a target force value.

"This indicates the stall test is an ineffective test of the actual holding power" of the cardan shaft brake, it said.

"A new CSB testing procedure should be investigated."

Only a single truck held in both the stall and pull tests with its handbrake set at the same level.

Waka Kotahi said earlier this month it was reviewing the testing regime.

But the test report said the weakness also extended to the checks being done on trucks when they were first imported into New Zealand.

Only Asian-made vehicles have cardan shaft handbrakes; US and European vehicles use wheel-operated parking brakes.

RNZ learned about the Wellington truck tests taking place when reporting on the brake failures, and on the incoming ban on a less common type of truck handbrake, the Sanwa Seiki brake.

In the deaths in 2017 and 2019, an effluent truck and a telehandler both ran away on uneven ground, with their cardan shaft handbrakes on.

Selwyn Rabbits, the father of Graeme Rabbits, one of the two men killed, helped with the brake research and is leading the push for industry-wide change. He declined to be interviewed.

The third death was in March 2020. RNZ is seeking more information about that.

The Transport Agency's main way of handling the problem since the alarm went up in 2012, has been to issue multiple safety alerts in an attempt to educate operators.

This study shows that has not worked:

The Transport Agency is preparing another education campaign.

The Wellington testers found even some new trucks had badly adjusted handbrakes, "raising the question of whether the manufacturers' pre-delivery inspections were being carried out correctly".

Cardan shaft brakes are sensitive to uneven surfaces, and to changes in load, because a heavier load means having to pull the brake on harder.

The 90 surveyed drivers were averaging more than four load changes per day.

But the routine Certificate of Fitness stall test is only done forwards, on flat and even surfaces, and the truck does not need to have any load on it.

The tougher pull test involved pulling a truck, both forwards and backwards, with its handbrake on, simulating a fully laden truck on an 18 degree slope.

In most cases, the handbrake had to be pulled on much harder than drivers typically would, for it to hold.

The test simulated a truck facing down or up a slope, and found a "noticeable difference ... indicating a lack of correct adjustment".

The overall mechanical condition of handbrakes was poor in 47 percent of the 90 trucks.

Land transport standards set out rigourous testing parameters that brake systems are meant to perform to. However, the standards do not stipulate how handbrakes should be inspected.

The report noted that some other countries do routine testing by putting the truck on a roller-brake machine, applying the handbrake, then switching on the machine.

However, one of this country's two roller-brake machine suppliers did not want its equipment used this way.

Waka Kotahi did a six-month trial of a handbrake maintenance form but this ended in mid-2020.

The agency did not respond to an earlier request for an interview about this.

It has not said how or if it has ascertained the extent to which operators are, indeed, using wheel chocks.