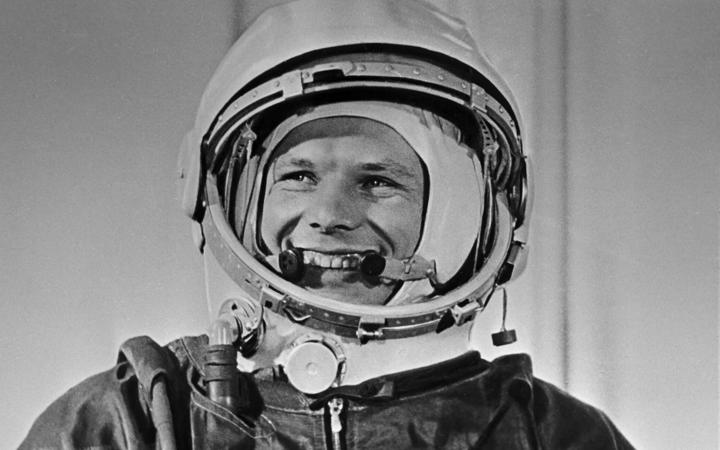 Gagarin became the first human in outer space on 12 April 1961 in one of the Soviet Union's most important Cold War victories and a pivotal moment in its space race with the United States.

Blasting into space from the Baikonur Cosmodrome, now in Kazakhstan, Gagarin's historic mission lasted 108 minutes. His re-entry capsule landed on the ground near the city of Engels in Western Russia with Gagarin himself landing by parachute minutes later.

Gagarin's orbit around the Earth propelled him to international fame and earned him the status of national hero in the Soviet Union, which put up statues and painted murals in his honour across its territory.

New Zealand astronomer Alan Gilmore, a former superintendent at Mt John observatory in Tekapo, was still at school and remembers learning about the launch on the evening news.

"In the morning the radio news said he had landed safely back in the Soviet Union I've got a note that the evening paper ... had big headlines about the event. It was big news."

"Russia had launched the Sputnik in 1957, much to the dismay of the Americans ... so there was definitely a space race going on and it was only a matter of time until one country or another launched a manned craft."

It may have been possible to see Sputnick from some places on Earth, he said, but Russia had kept the initial news of the launch secret.

"There would have been somewhere along the track where it passed over at dusk and dawn people there might have seen it if they'd known where to look.

But the Russians didn't put out any prior warning - in fact the Tass news agency I see was told only to release information when the craft was safely up.

"So they were about 20 minutes, half an hour into the flight before it was announced internationally that there was an astronaut up there.

"The reason why they did that was in case he came down in some other country people would know to expect a Russian [cosmonaut]."