It's crunch time in Northland for a pioneering peanut crop which government agencies hope could provide a viable product for the area.

Most people know the Kaipara region as kumara country, but things are changing. While in recent years there's been a lot more dairy, things are now starting to look downright nutty.

The Ministry for Primary Industries has teamed up with the makers of Pic's Peanut Butter to trial growing peanuts near Dargaville.

The hope is to create a totally homegrown peanut product - a perfect addition to toasts across the country.

Plant and Food Research business manager science Declan Graham has had his hands full with bunches of peanut plants - the culmination of months of hard work.

"My vision would be that we see quite a few hectares planted, sown and yielded and we've got some infrastructure up here and we've got an alternative cropping option for the folk and the farmers of Northland.

"They're a good size and I think they're gonna make a good snacking nut as well as a peanut product ... with a little bit of chilli on it as well."

Declan has been working with local farmers and staff from Kaipara Kai and Farmlands to see whether their dream to get Northland peanuts off the ground could become a reality.

They move through this relatively small trial crop - roughly two tennis courts in length picking up their nuts and shaking dirt off the roots.

"So you grab the bush, grab the peanut, and just pull it off. Simple." 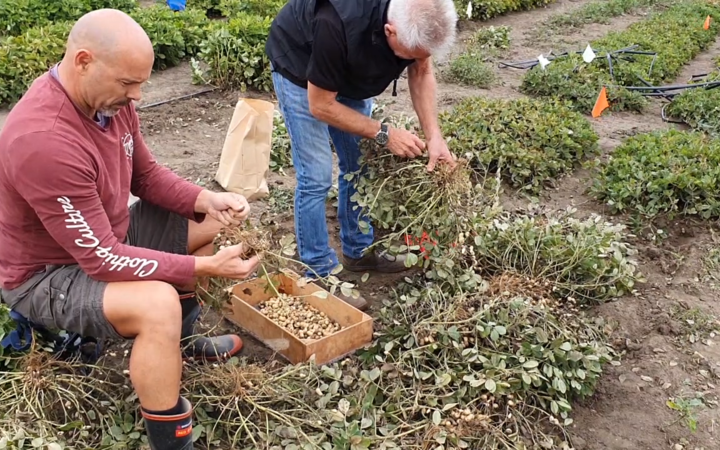 Kaipara Kai's Greg Hall is behind the local council initiative looking at what crops will grow in the area, and said he could see the benefits if the trial went well.

"The food bowl in Auckland's getting smaller and smaller through housing, and the Kaipara region's got a good opportunity, fertile land, to actually increase the variety of food that we grow."

Northland was chosen for its warm temperatures, particularly in the soil, and peanuts are a prime crop to try - they restore the soil and put nitrogen back in.

The crop was being farmed on Allister McCahon's land - but he said it was not the first for the area.

"Peanuts have been trialled in the area in the '70s, not far from here, in multiple locations, so this is not technically new. It is I guess a refresh of previous work which also tells us there's merit in looking back before we go forward.

For him, the appeal of the peanuts was all about doing better with water.

"The rules are that we can't use water for dairy so what else would we do with the water. That's effectively what it is, that's the rules that have been set in place by the ground."

While dairy has been white gold for a long time, Declan said peanuts did not necessarily pay peanuts.

"If we're getting crops ... in the order of six tonnes, seven tonnes per hectare then it's gonna be more profitable than maize."

While this crop is just small - about 0.1 hectares - if the scaling up is successful, Pic's peanut butter should be able to fill a few jars with the home grown goodness.

The next step for the nuts is crunching the numbers - oil content, flavour, as well as the yield of the crop. Declan has big hopes - next year he wants to scale up - and then the following year consider what infrastructure might be needed.