Survivors and family members of the victims of the Christchurch terror attack have told a public remembrance service that their lives will never be the same, but they are learning to rise up again with dignity. 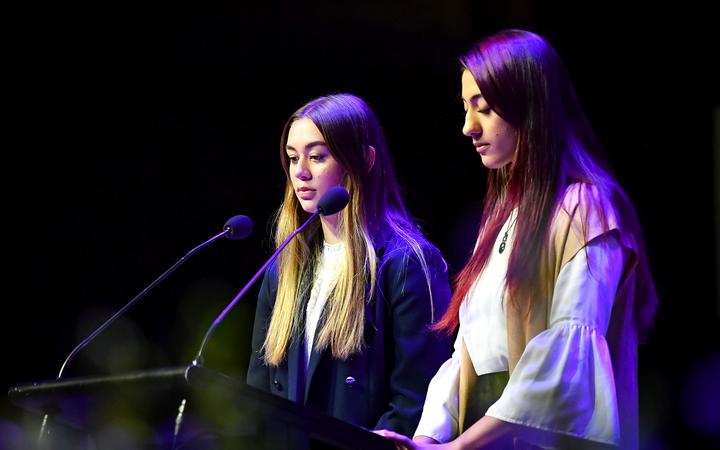 Zara Omar and Sara Qasem read out the names of the people who lost their lives on 15 March 2019. Photo: Supplied / Mark Tantrum

The 'Ko Tātou Tātou We Are One' event at the Christchurch Arena - held this afternoon to mark two years since the Christchurch terror attack - was intended as a way for all New Zealanders to show solidarity with those affected.

Speaking for those injured in the attack, Temel Atacocugu broke down as he recalled the day of the massacre and said it was a miracle that he is alive.

"I was shot nine times. Four bullets in my left leg, one in my right leg, three in my left arm and another one in my mouth. The bullet in my mouth was stopped on its way to my brain, only because of a dental bridge made by a Turkish dentist a long time ago.

Atacocugu said said the 200 metres he walked to the ambulance was the hardest walk of his life. And recalled sitting beside his friend Aden Ibrahim who was cradling his son Mucaad Ibrahim.

"I recognised Aden and Mucaad from our Friday prayer sessions. The paramedics told him that his son was dead and there was nothing they could do for him. Suddenly my own pain felt insignificant, my heart wept for them."

He said many of his own wounds will never fully heal.

"I have since had seven major surgeries and there are more to come. I will carry lots of shrapnels in my body for the rest of my life. Everytime I have an x-ray it lights up like a Christmas tree."

"But I am a strong, stubborn Turkish Kiwi, who has been brought up to battle on, and that's what I will do."

On behalf of all the survivors, Atacocugu thanked those who helped them that day, "many at their own risk".

"To the many bystanders, neighbours, paramedics, the emergency departments and hospital staff, please accept our heartfelt gratitude. And to fellow New Zealanders and all people around the world watching, thank you. Thank you for never leaving us alone. Thank you for always standing with us. Please continue to stand with us.

"The 15th of March 2019 attacks left an undefinable pain in our hearts, a pain we are never able to erase. We will never be the same. However the future is in our hands. We will go on and we will be positive together, just like my friend Aden... our smile will never be taken from us."

Dr Kiran Munir, who lost her husband Shaheed Dr Haroon Mahmood in the attacks, said he was a well educated, honourable and refined man.

"He was the love of my life and will always be. My husband for 13 years and my extraordinary soulmate. He was my best friend of 20 years, my pillar of strength, my shelter, my safe space."

She is one of 34 women made widows by the attacks, and said her heart broke into a thousand pieces on the day of the shootings, but the support she received from ordinary New Zealanders had been like a bandage on her wound.

"I'm standing here in front of you and asking: should this be the price to pay if my faith, language, attire is different from you? Does any of it matter - we all are one."

She said the best revenge was not to be like your enemy.

"Despite the tragedy we have faced, we are learning to rise up again with dignity and move forward as best we can. The outpouring of aroha from our fellow New Zealanders, spurred on by the strong and kind leadership of our prime minister Jacinda Ardern meant that we never felt alone in this journey.

"Phrases like 'we have hope', 'we are one' and 'salaam' have been our collective message to each other and the world." 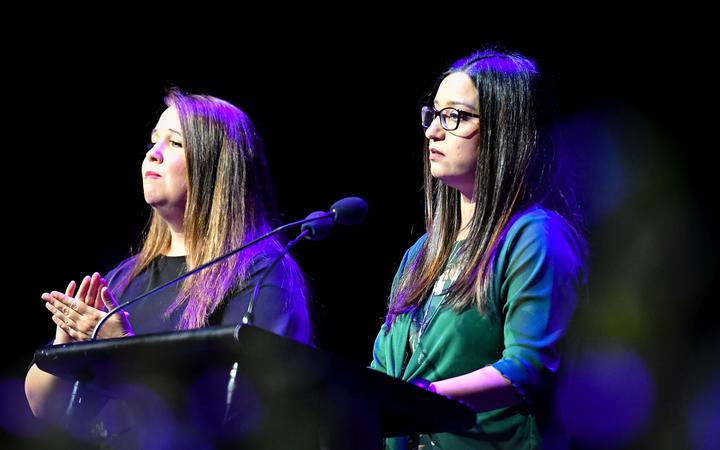 Maha Elmadani, whose father Ali Elmadani died in the terrorist attack said the pain of losing these 51 lives had not only impacted the people of Christchurch.

"It was a pain that rippled throughout New Zealand and the rest of the world and continues to be felt to this day. They were loving fathers, mothers, brothers and sons. Today we remember them. They had so much to give to this land, they were proud Kiwis and we were blessed to have them in their lives.

"One of those proud Kiwis we lost was Ali Elmadani, he was my dad and he took with him a part of my soul. My baba was a man of few words, gently spoken in classical Arabic. He was a custodian of knowledge and history. When he spoke, everybody listened. He was my teacher, my anchor and my source of truth. Through him I learned about my faith and my Palestinian heritage. When he left this world, so too did the light.

"I wish for a safer more inclusive Aotearoa, where our young generation and all those who follow can be proud of their identities and live freely from fear of discrimination or ignorance."

Faisal Sayed - who was praying at the Linwood mosque with his father when the shooting started - said he had never felt prouder to be a Muslim as much as he had felt in the past two years.

"My community was in pain and in tears. It was slowly healing and recovering. It shared a message of forgiveness and what it really means to be peaceful.

"Whilst forgiveness and sharing peace is a prominent part of our faith, having a voice and standing for justice is also strongly embedded in my faith. That strength, that grace, could be seen in the court when my community members confronted the gunman. I've never felt any prouder, being a Kiwi, as much as I've felt in the last two years."

The Prime Minister Jacinda Ardern told the audience there will be an unquestionable legacy from the attacks, which have changed New Zealand. And while much of it is heartbreaking, by standing together there are opportunities to grow a stronger nation.

"The scars that have been left are many, and we have a duty to listen here and respond with words and deeds that support you while they heal.

"It is never too early, or too late for the legacy to be a more inclusive nation, one that stands proud of our diversity, embraces it and if called to, defends it staunchly."

"I know how hard that can be. However a seed of understanding is planted each time such a story is shared. And with that understanding, we see that differences sometimes mask all that we have in common. And it is all we have in common, our shared humanity, that brings us together in times of need, and again today.

"Today we also reflect on the leadership of our Muslim communities who asked us to unite in peace, love and forgiveness so we could overcome the division and further acts of violence this attack was designed to cause. We can all be proud of how we responded and how we supported each other with kindness and compassion." 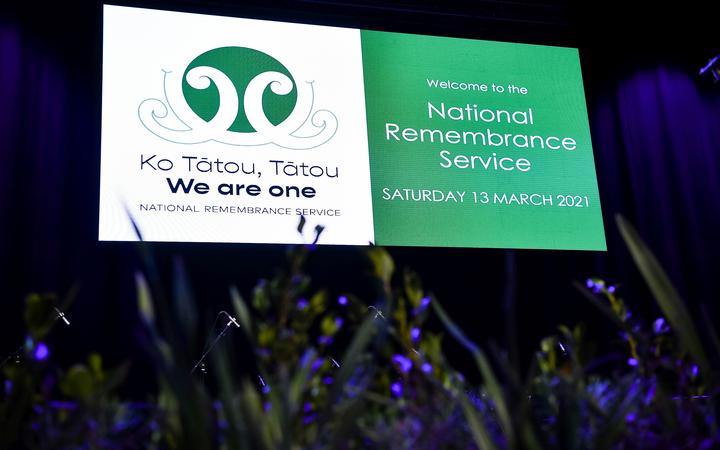 A special prayer service was also held at Masjid Al-Nur in Christchurch this morning.

About 50 people attended the dua service, also known as a prayer service, which was held by the Muslim Association of Canterbury.

The dua was read out by imam Gamal Fouda, who prayed for those who lost their lives in the massacre.

He said the attack had ultimately failed, and the terror attack did not succeed in breaking the country. 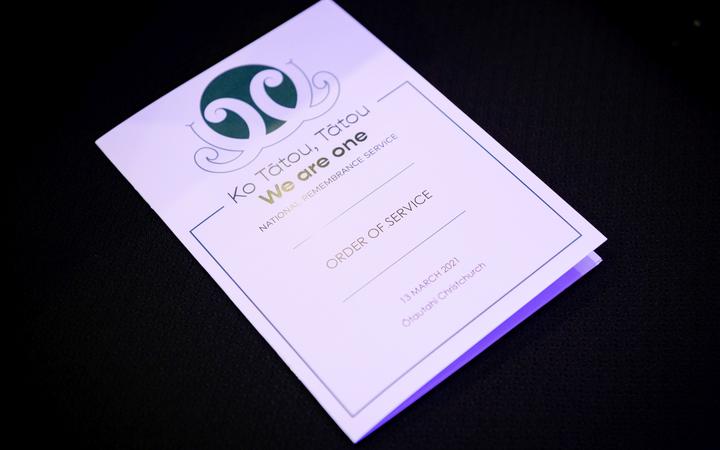