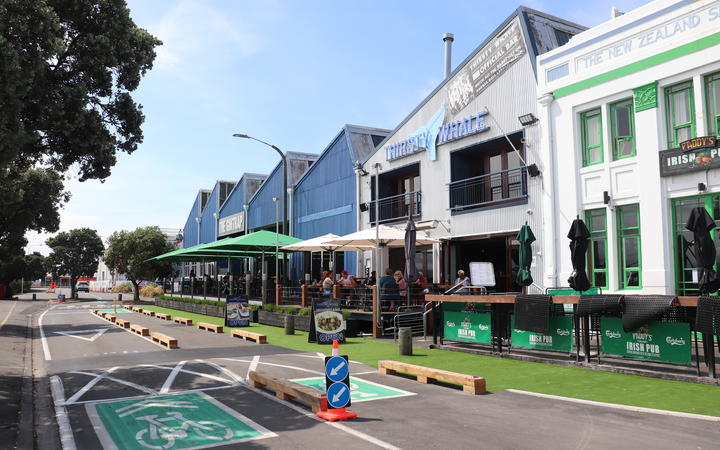 The Thirsty Whale on West Quay in Ahuriri, Napier is operating as normal after a gang shooting at the weekend. Photo: RNZ / Tom Kitchin

Eastern District Commander Superintendent Jeanette Park said the pair is believed to be closely connected to the shooting, which happened outside a number of licensed premises on West Quay about 12.30am.

The men have not been charged at this stage, but are helping police with inquiries.

They were caught after fleeing on foot and abandoning their vehicle, police said.

One of them, who went into Karamū Stream in the pursuit, was taken to hospital in a moderate condition, assessed and discharged.

Victims of the incident and the owners of licensed premises have been spoken with, police said.

Police said they were following positive lines of inquiry, including reviewing a significant amount of CCTV footage and investigating other potentially connected events.

Park said police recognised this was a concerning incident for the Hawke's Bay community, and they were talking to senior members of gangs in an effort to re-establish calm.

"We are maintaining temporary carriage of firearms for staff and this decision is being reviewed daily."

Police are urging anyone who may have witnessed the incident - or the confrontation between rival gang members prior to the shooting - to call them on 105 and quote Operation West Quay and/or file number 210301/4406.

Alternatively, people can call anonymously via Crimestoppers on 0800 555 111.