Various events across Christchurch are being held in commemoration of the 10th anniversary of the 22 February earthquake.

It will be a chance for the community to gather in remembrance of the 185 people who died and reflect. 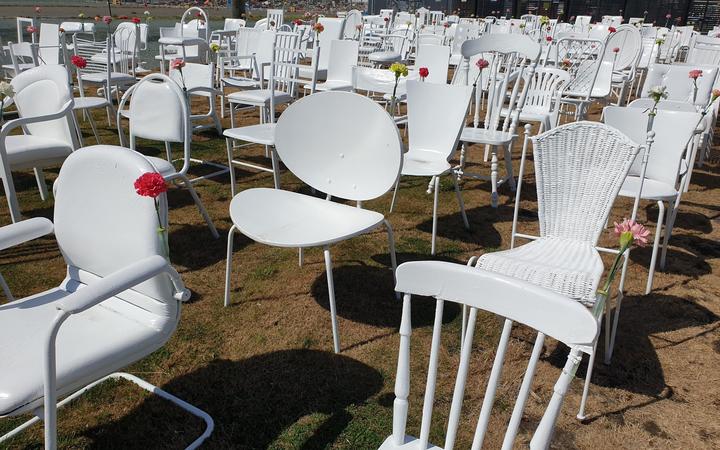 The 185 chairs installation organisers are asking for a helping hand this weekend as it relocates. Photo: RNZ / Conan Young

The notable 185 chairs installation, created by artist Peter Majendie, has been a place of commemoration for years. This year, the installation has been relocated near the St Luke's Anglican Church on the corner of Kilmore and Manchester Streets.

"Canopy Landscape Architects have created an exciting plan for the new site. Further news to follow," the organisers said on Facebook.

The organisers are asking if anyone is free and willing to pitch in on Saturday to repaint and position the chairs, and tidy up the grounds at the new site.

"If anyone has a chair they would like to paint to add to the installation they could bring it on Saturday."

The Press Run to Remember also returns. It's a 10km run and walk that has been since 2012 in memory of those who died in the 2010 and 2011 Canterbury quakes.

More information about the event, location, time and how to enter can be found here.

A civic memorial service will be held at 12.30pm on the north bank of Oi Manawa, Canterbury National Earthquake Memorial. Governer-General Dame Patsy Reddy and Prime Minister Jacinda Ardern will be there.

It will include a minute of silence. See the order of service here.

For those unable to go, a livestream from the council is also expected. It will be shown on some screens at the central library, Tūranga, as well as a large screen in a grassed area on the other side of Montreal Street.

Christchurch City Council (CCC) has worked with the Quake Families Trust on the programme for the service, which is set to acknowledge all those affected by the quakes and those who helped in the aftermath.

"We are mindful that the Covid-19 pandemic means that many people who would normally travel to Christchurch for the 10th anniversary of the earthquake will be unable to do so," said CCC civic and international relations manager Matt Nichols.

In terms of traffic, Montreal Street - from Tuam Street to Cambridge Terrace - will be closed from 9am to 4pm. The Memorial Wall will not be open to the public from noon until the end of the service.

For those planning on travelling to the service by public transport, the Bus Interchange is only a 10-minute walk from the Memorial Wall. A parking area has been set aside for bikes.

Oi Manawa is situated next to the Avon River and displays the names of those who died in the quake.

People can lay tributes at the Memorial Wall or throw their unwrapped floral tributes in the Avon River following the civic service.

The inaugural River of Flowers, created by Michelle Whitaker Evan Smith, will be back again.

There have been up to 20 River of Flower sites along Canterbury waterways, where people write notes of hopes, drop flowers into the river, and hold two minutes of silence at 12.51pm.

More information on the locations and times for River of Flower sites will be available here.

The former Canterbury Television (CTV) building site - where 115 people died - is another open memorial space for people to gather for commemoration and reflection.

The site, on the corner of Madras and Cashel Streets, was opened as a memorial on 22 February 2018.

Locals can also head over to Quake City, the Canterbury Museum's special exhibition about the quakes, where there will be free admission.

Recent additions to the exhibition include a sculptural wall of orange road cones in the entry area and a slideshow of buildings, artworks, and streetscapes, showing how Ōtautahi Christchurch has changed in the decade since the earthquakes.

Several Cantabrians who recount their experiences in the film 12.51, which runs in the exhibition, have been reinterviewed and feature in a new short film, reflecting on how their lives have changed in the past decade.

A free music event, Ōtautahi Together, will be held on Sunday 28 February from 2pm to 4pm. It will feature Bic Runga plus special guests performing on the Archery Lawn in Christchurch Botanic Gardens.

This event will also be livestream, according to the council.