Tonnes of toxic waste will finally be removed from a Southland town, but some Mataura residents say that after many failed promises, they'll hold off celebrating until they see firm proof. 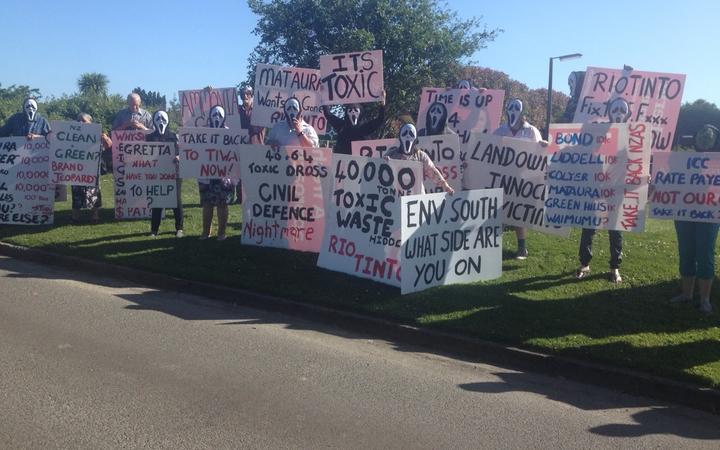 Southlanders protesting last year about the toxic dross stored around Invercargill and Mataura. Photo: Facebook / Sort out the Dross group

The government has announced a deal with New Zealand Aluminium Smelters - the two will share the cost of around a million dollars to remove about 8000 tonnes of aluminium dross from Mataura's paper mill.

The dross - ouvea premix - was stored in the mill on the banks of the Mataura River, which is prone to flooding. If mixed with water, it releases deadly ammonia gas.

The waste is now due to be taken back to Tiwai Point by the end of April, processed by a third party, and exported.

Minister for the Environment David Parker said he would rather not pay for the clean-up, but the government's hands were tied.

"I don't want to sound too churlish, it is good the smelter has come to the party for half of that extra money, and it is good that the ... third party who processes it into a safe material are also assisting," Parker said.

"It's a good thing, but it leaves a slightly sour taste in the mouth that we're having to pay taxpayer's money.

"I think people that cause pollution should pay for it, rather than others, as a general proposition. And I thought that applied here. There have been various deals done in the past that have compromised the Crown's position and I as minister am bound by those agreements so our freedom of movement was ... narrower than you might want, but we've now resolved it and we can moved forward."

As for other ouvea premix storage locations in Southland, Parker said he would "not predetermine what might be the case for other issues that might arise".

The dumping site was right in the middle of what had been a traditional harvesting site for the iwi.

"It's welcomed, and we must congratulate the Mataura Community Action Group ... and minister Parker."

Mataura resident Lisa King said there had been agreements before with no change.

"So with more than one entity being in on the clean up bill I'm very sceptical of what's going on... I'm just hoping it is gone."

The smelter should be held accountable for anywhere the product had been dumped, she said.

Nicholas said he could "rest assured it is getting removed, but I have to agree with [King's] sentiments and concerns too, because there has been a lot of promises around here and people have pulled out.

"This community has just lived in hope that it will be gone and I can just see the window of opportunity that it is gone."