A car drove the wrong way down a Wellington motorway for nearly 8km before fatally crashing into another vehicle on Tuesday morning, police say. 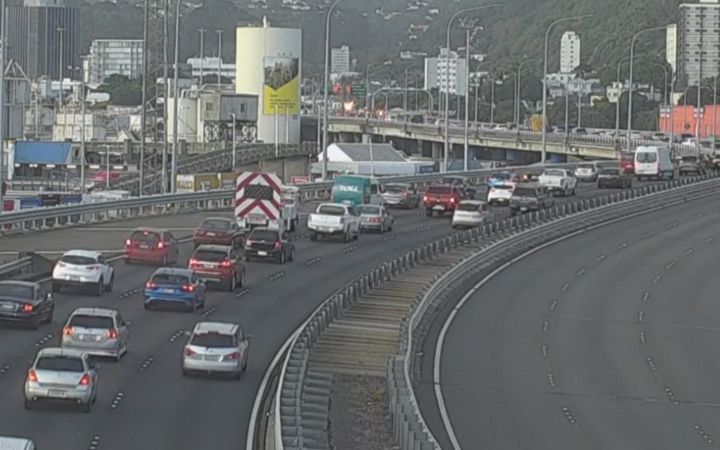 Police were alerted to the crash on the flyover between the Molesworth St on-ramp and the Aotea Quay on-ramp at about 4.20am. Photo: Twitter/NZTA

Police were alerted to the crash on the flyover between the Molesworth St on-ramp and the Aotea Quay on-ramp at about 4.20am.

Two people, who were travelling in the same vehicle, died at the scene.

The two people in the second vehicle, which was travelling northbound, sustained serious injuries and were taken to Wellington Hospital.

A Capital and Coast District Health Board spokesperson said one patient was undergoing treatment and the other was in a serious condition in intensive care.

The serious crash unit has left the scene and contractors are cleaning up.

SH1 northbound lanes closed prior to Aotea Quay, including the Arras and Terrace tunnels, have reopened, as has a southbound lane closed so emergency services could get access to the site.

Motorists travelling southbound into Wellington are asked to travel with care especially while travelling past the crash site.

Police said they would be speaking to witnesses and reviewing CCTV footage, and anyone with information about how the crash happened should contact Police via 105 and quote event number P045189509.

Meanwhile, a teenager has died in a crash between a truck and a cyclist in the Bay of Plenty.

The accident happened shortly before 3pm at the intersection of Sandhurst Drive and Papamoa Beach Road.

Two people were also taken to Middlemore Hospital with serious injuries after a crash this afternoon between two vehicles on Bucklands Beach Road in east Auckland.

The vehicles reportedly collided head on. Two other people are also in hospital with moderate injuries.