A new exhibition in New Plymouth looks at the impact of colonisation on Māori. 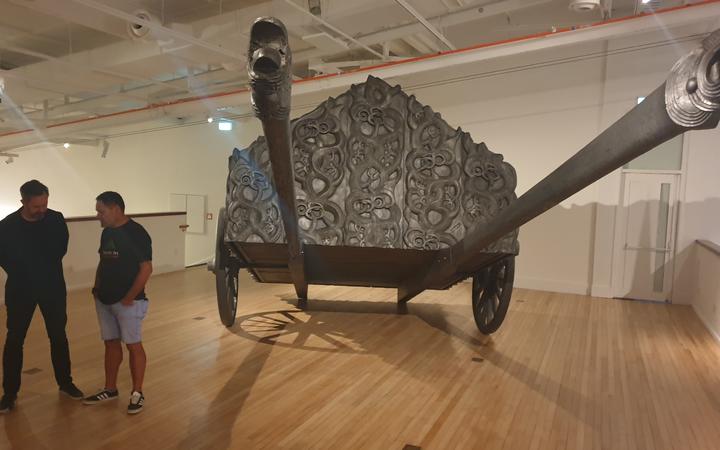 Step into Brett Graham's Tai Moana Tai Tangata exhibition and you are immediately confronted by a dark and ominous soundtrack that suggests it may be a challenging experience.

Subtitled - 'A cautionary tale about human endeavour in Aotearoa New Zealand' - it draws parallels between the land wars, confiscation and environmental and economic problems of the present day.

Graham (Ngāti Koroki Kahukura, Tainui) completed an artist in residence at the Govett-Brewster gallery in 2019 where he researched ties between Waikato-Tainui and Taranaki, and the effects of the raupatu, or land confiscations, on both.

A 10-metre high niu, or pole, a symbol of Pai Mārire or Hauhau movement - which originated in Taranaki - is the first of five monumental sculptures you encounter.

The Waiuku-based artist said the piece - Cease Tide of Wrong-Doing - which references Parihaka was central to the exhibition. 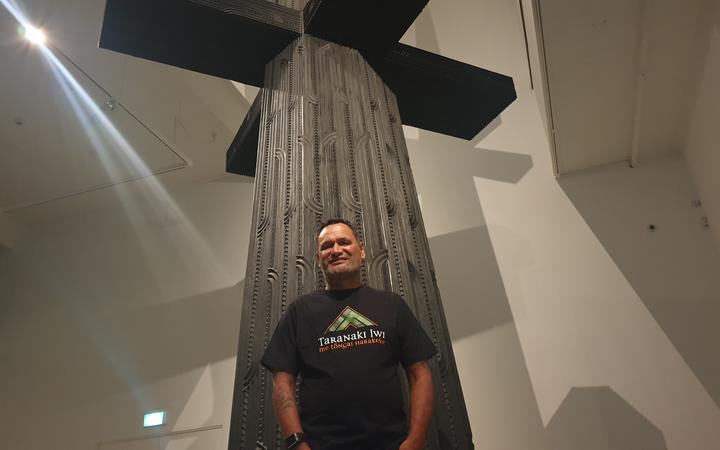 "These haven't been seen in parts of the country for over 150 years and for our people to come back and then energise that pou and return our version of the Pai Mārire karakia that we still practise on every gathering and do that here in Taranaki was incredibly moving."

Juxtaposed to the niu is one of three video installations, this one featuring Te Namu. 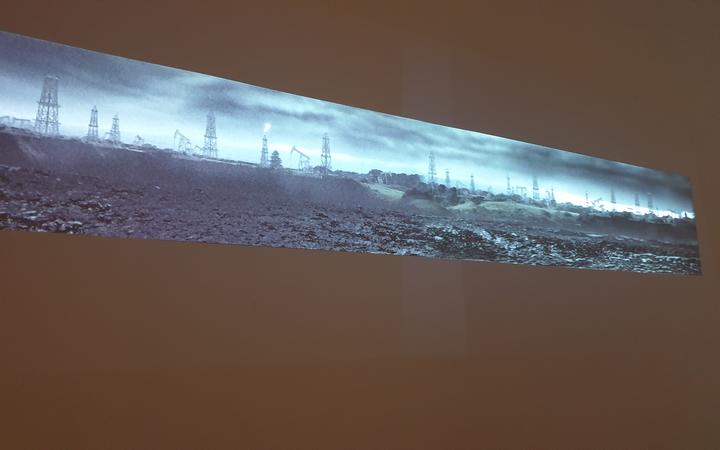 It was at this Opunake beach that Hauhau prophet Te Ua Haumēne had a vision, in which the Archangel Gabriel informed him God had chosen him to cast out the Pākehā and restore the land to Māori.

But here the beach is covered in oil rigs and gas flares while the ocean is a sickly black.

"It has to relate to the present as well as the past and that's where the films blatantly show the message that because of the vast confiscation of land and because of the attitude that those settlers brought with them that sort of led to rampant capitalism and the exhaustion of resources."

On the first landing, the sculpture Pioneer is a stylised version of the turret of the eponymous gunboat which cruised the Waikato River during the New Zealand wars.

The carpet on the steps leading up to the wedding cake-like structure is inlaid with the hatchments or colours of the militia and regular army units that took part in the Taranaki wars.

That resonated with Wharehoka Wano who heads up Whiringa Toi - the gallery's advisors in Te Ao Māori.

"Well you know that's takahi, isn't it? Like when we say takahi we talk about trample. You know it's when we tramp a house, we walk a house. We put our presence upon that place and there's also another part where we're also showing a bit of disregard so here we get to repay the compliment."

Wano said the exhibition is important for Māori and Pākehā alike.

"I'm positive that there's a desire to know the truth and to know more cause you know you've still got that almost racial undertone on us tribally that's based on ignorance because they don't know.

"The attitude is let's forget about that history we've got to move on and we all want to move on too but it has to be based on understanding."

Acting Govett-Brewster director Antony Rhodes was equally adamant the exhibition was a must-see.

"What happened here was unique in many ways and it was also nationally and internationally significant. The connection between Parihaka and Gandhi, the knowledge of peace and passivism radiating out to the world from Parihaka.

Tai Moana Tai Tangata continues through to May.