Monster fatburgs discovered in a Whakatāne sewer will take days to remove and cost ratepayers thousands. 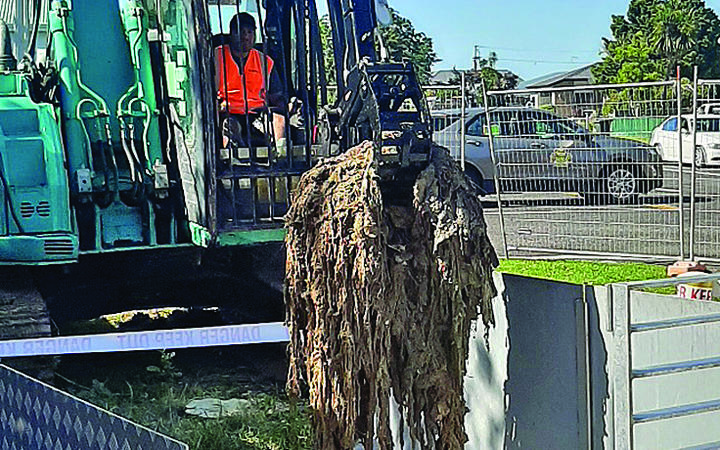 Contractors have used a claw hook attached to a digger to remove the fatburg from the Victoria Ave pump station. Photo: SUPPLIED

What was expected to be a one-day job on Wednesday will now stretch into next week with Whakatāne District Council staff discovering more than one fatburg was blocking the pump station on the corner of Hinemoa Street and Victoria Avenue.

As of yesterday afternoon, contractors had removed three cubic metres of foul-smelling waste, mostly made up of fat, grease, wet wipes, and sanitary products.

The work is considered urgent, as the pump station has been struggling to cope with the blockage.

Three waters operations team leader Luke Shipton said a claw hook attached to a digger had been used to drag the mass out of the pump station.

"This unexpected work is likely to cost thousands to resolve and is completely avoidable," he said.

"It's a reminder to only flush the three P's - pee, poo and (toilet) paper. Do not flush wet wipes, even those that claim they are biodegradable, or pour fat, grease, and oil down your sink.

The hardened fat and oil combines with other non-flushable things like the wet wipes to make huge fatburgs and this is what's causing issues in your neighbourhood."

Shipton said the correct way to dispose of leftover fats and oils was to pour them into a container before putting it in the rubbish bin and to wipe greasy pans with paper towels before washing the dishes.

All non-flushable items were exactly that - non-flushable - and should be put in the rubbish bin rather than the toilet, he said.

Shipton noted that most wet wipes contained plastic, as did many sanitary products and single-use nappies.

"If we take these simple steps, we can reduce the need for future smelly and expensive clean-up operations," he said.

Fatburgs have been giving councils around the world a headache and are no longer associated only with big cities.

In July last year, a Gisborne sewer overflowed after heavy rain due to a fatburg blocking the pipes.

This fatburg was 15 metres long, weighed half a tonne and was made up of fat, rags, wet wipes, and condoms.