State Highway One, near Levin, has re-opened several hours after a serious crash closed the road - creating a massive backlog of traffic. 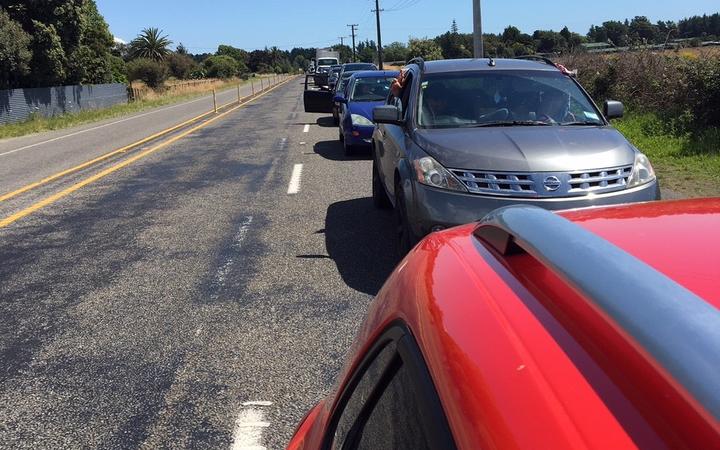 RNZ producer Melanie Phipps was stuck in a long queue of traffic for a couple of hours while attempting to drive north to Taupō. Photo: RNZ / Melanie Phipps

The New Zealand Transport Agency earlier said there was no detour due to the location of the crash - near the Ōhau Bridge.

Police say two people were seriously injured in the crash, which involved a motorcycle and truck.

A helicopter was at the scene, and due to the lack of a detour, motorists were advised to avoid the area.

UPDATE 2:20PM
SCU are now on site at SH1 Ōhau to investigate the crash. This investigation will take several hours. Please continue to delay your travel through the area or expect MAJOR DELAYS, as there is no detour available. ^AL pic.twitter.com/0Zko8P5TMe

RNZ producer Melanie Phipps was stuck in a long queue of traffic for a couple of hours while attempting to drive north to Taupō.

She said it was hot, sticky, and people were getting out of their cars.

"There's quite a high volume of traffic of cars and bikes that are just turning around and giving up - going home or going back," she said.

Phipps says there was luckily a portaloo on the side of the road near where she's "parked".