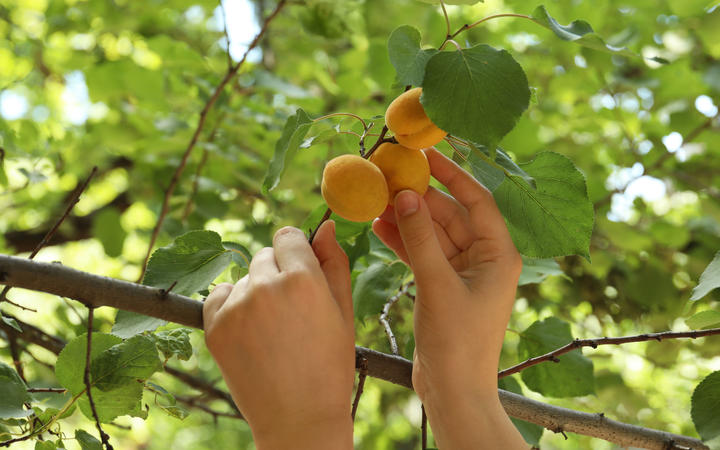 It follows union concerns that plenty of people are applying for jobs, but are waiting weeks for replies if they get them at all.

Orchard owners have been calling for the government to allow in more seasonal workers from Pacific countries to help with the summer fruit harvest.

He has had a large number of job applications, and said they did their best to get back to people as soon as they could.

"Of those that we receive, we assess those and we respond back to those. We do background checks as best we can and we endeavour to select the people that we think are going to be best suited for the job, and not everyone is and unfortunately I think there's some misconceptions about horticultural work, about orchard work," Darling said.

"That's why we do our best to make sure that people are suited to those roles."

"They charge the Islanders up to $150 a week for accommodation. They've only got - I think - 32 hours as a minimum. They don't have to pay KiwiSaver and they move them around as required so there's clearly business benefits in having Island labour here," Fisher said.

The government previously announced 2000 additional RSE workers will be able to fly in early next year to help with the harvest, along with incentives for unemployed New Zealanders to take on seasonal work, including $1000 for people who complete jobs of six weeks or longer.

Sid Birtles manages Remarkable Orchards in Roxburgh, and said they usually employed New Zealanders first with peak cherry and apricot picking, and packing being due to be done next month.

"But whoever comes through the door, then quite often we're generally wanting to employ them," Birtles said.

"This nonsense about the 2000 people coming into the country, that's a fantastic first step. It's a step too late for us generally, it's finished for the stone fruit season."

He disagreed the industry was after cheap foreign labour.

"That's rubbish. We're obliged to pay minimum wage anyway and that's across the board no matter who you are. There are incentives for people to encourage them to do more because there's certainly urgency in the picking and the timeframe. Fruit doesn't wait for tomorrow in some cases."

Summerfruit New Zealand chairman Tim Jones said the industry had been overwhelmed with applications after putting out a call for help with harvesting.

But he agreed they should do better.

"Growers could obviously be doing a better job and the message needs to go out to growers that really it is polite - at a minimum - to respond to the enquiries they're getting and to give people a little more information about what jobs are available, what the conditions are and when those jobs start."

Martin Milne owns Cheeki Cherries which harvests about 100 tonnes of cherries across three orchards around Cromwell.

He has hired a company to handle hiring pickers and packers for the past four years - during peak harvest, he'll have more than 100 pickers.

"I think there is a lot of work around here ... it's just coming up to the end of December and beginning of January. That's when things are really going to crank up. I would expect people to be getting employed by then. There is a lot of fruit on the trees and it has to come off so if you don't get the job first time out, don't be disheartened. Keep your finger on the pulse and keep applying," Milne said.

Summerfruit NZ has appointed a seasonal labour coordinator to help the industry.

And with a large number of applications, Jones said the fruit industry should have enough workers to keep the harvest from going pear-shaped.