The top District Court judge has announced a fresh approach to the way the country's busiest jurisdiction operates. 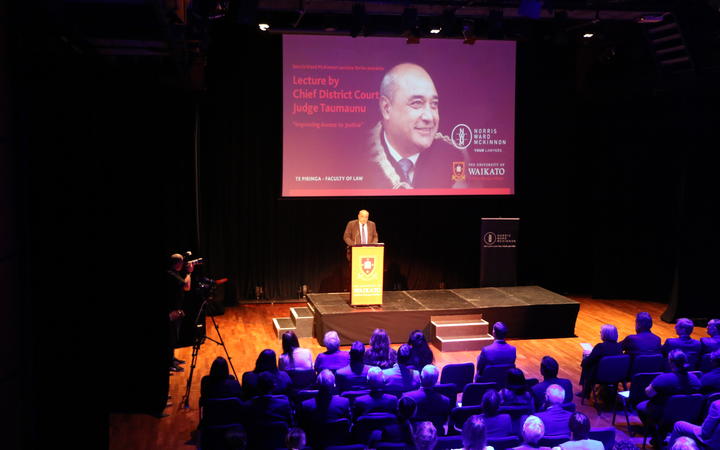 The new model, Te Ao Mārama, will take practices from specialist courts and apply them to the mainstream criminal system, starting in Hamilton next year.

It was announced by Chief District Court Judge Heemi Taumaunu at the annual Norris Ward McKinnon Lecture at Waikato University on Wednesday.

The top judge, who can't change laws but sets the standards for best practice, said Te Ao Mārama reflected the needs of a multicultural Aotearoa.

The new model will change the courtroom experience; inviting iwi and community groups into court, toning down formalities and identifying the underlying drivers of crime.

It will also adopt plain language and have greater use of speakers through cultural reports that can be ordered under Section 27 of the Sentencing Act 2002.

Judge Taumaunu said the mainstreaming of best practices from therapeutic courts is a significant moment for the District Court and should make justice more accessible.

"For many years, judges of the District Court have been leading innovation in solution-focused justice through specialist courts.

"These courts focus on offenders where issues such as addiction, homelessness, cultural disconnection and poor mental health, among others, are driving or contributing to their offending."

Judge Taumaunu called it solution-focused judging and said it was not the easy way out.

"This approach is underpinned by extensive academic and jurisprudential theory. It is not mere trend or fad. It is both evidence-based and legally sound."

The new model comes after decades of calls for transformational change in the justice system backed up by a wealth of reports finding systemic failures.

Rahui Papa of Waikato-Tainui said Te Ao Mārama was a positive step that built on the years of research and advocacy that had come before.

"Our old people have been calling for this for a number of years, Puao Te Ata Tu from John Rangihau and Moana Jackson for example, the justice sector, Oranga Tamariki, the whole gambit have been asking for wholesale changes. This is really an accentuation of the stuff that's happening but it's a step in the right direction."

Secretary for Justice Andrew Kibblewhite, who heads the ministry that works to support judges in court, said the new model was a big step for the justice system.

"We're really excited about it. I think the leadership the judge is showing is setting a path. It's very consistent with the work the government has been talking about through the Hāpaitia programme last year. So there's a coming together of where the executive would like to go and where the judiciary are keen to go so it's a very exciting thing."

Te Ao Marama is still a work in progress; it may be years until it's up and running in every courthouse and there isn't yet a way to measure its success.

But Judge Taumaunu is hopeful it will build confidence the justice system and those who encounter it will feel they have been heard and understood.

It's expected Te Ao Mārama will be introduced in the Hamilton District Court in the middle of 2021.