Emergency services remain on standby in Napier as hundreds of homes are damaged and at least 19 uninhabitable after Monday's deluge. 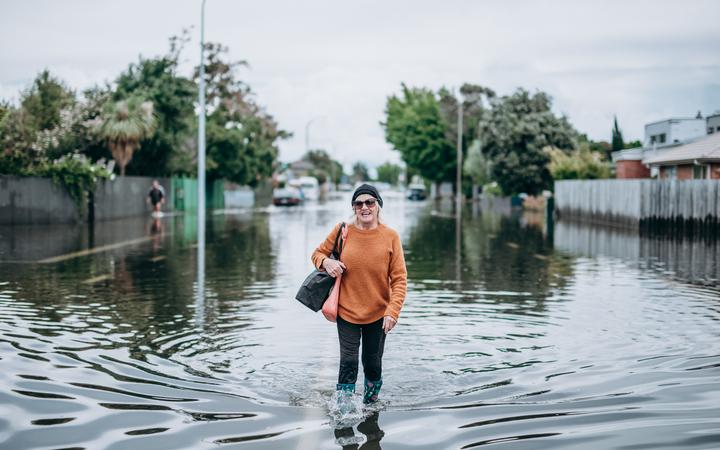 About 30 people have been forced to shelter at an evacuation centre.

Residents in some low-lying suburbs remain trapped in their houses and a number of cars are still stranded in the middle of roads that are still lakes.

One of those families staying at the evacuation centre at Kennedy Park was the Wepa family who have been shut out of their home since Monday evening.

They decided to leave their house when the water was rising, nearly reaching the front door.

There were nine of them in the house, seven adults, and two babies.

"We rushed around, stressed, trying to get everything, put everything in rubbish bags, [and then] chuck it in the truck," said mother and grandmother, Christina Wepa.

"Trying to get our stuff and our family into the truck was awful. The water was right up. We literally were waist deep."

That night, they stayed at her daughter-in-laws - 18 of them in total, crammed into a three-bedroom house in Flaxmere.

Then on Tuesday, they were told they could stay at the evacuation centre at Kennedy Park, where they've spent the last night.

She heaped praise on the Civil Defence for their efforts providing support to them. But she said that can't take away how surreal the situation is.

"It's emotional, because we're not vulnerable people, we don't rely on [others], we're strong, we're independent."

What's even more concerning she says, is many of her neighbours and people in her community don't know the help is available or how to access it.

While she's grateful for the night of accommodation, for many people and families, there remains a lot of anxiety about what comes next.

"We've got no insurance, so we're worried about our home being ripped off, people knowing that we're not there.

"We're just sitting here - we can't just drive to our home because our car [would be] halfway under water." 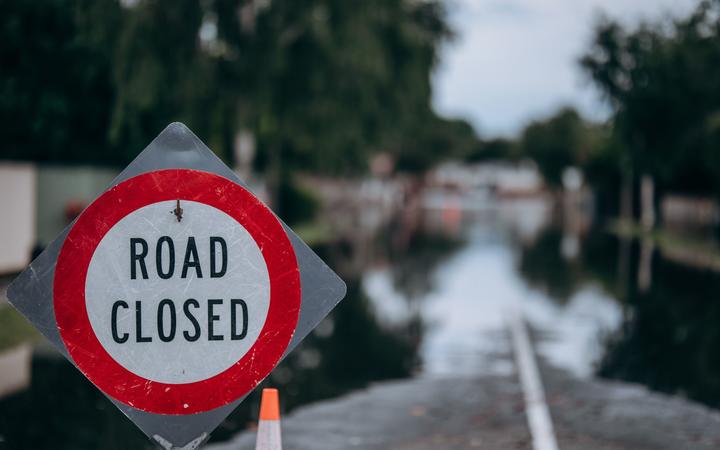 Families who chose to stay at their homes in the hardest-hit areas remain effectively trapped, unable to leave without wading through water, which at points remains waist deep.

Daygo Ngatai lives with her son in Marewa - a suburb in Napier South. The water hasn't reached inside her home, but it isn't shifting in the street outside.

"We're gonna buckle down and watch movies and munch. Try and block out the rain, because the rain's pretty heavy. Have you noticed the rain drops? They're huge!"

She was able to stock up on supplies after her sister picked her up and took her to the supermarket.

To get there, she had to get through water - which wasn't going anywhere.

"It's gone down maybe 10 centimetres since this morning, but it hasn't moved nowhere. And I still know because every time I go out it's knee deep."

The deluge on Monday night also led to the dramatic rescue of a woman who was caught in a river of mud. 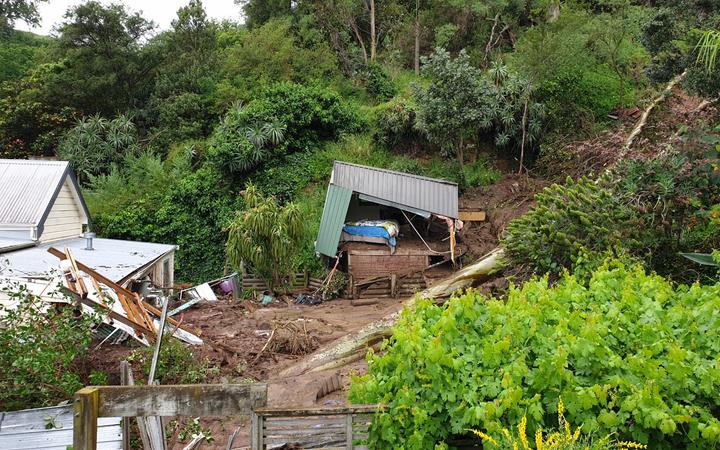 A woman was rescued from a landslide at a house on Hospital Hill Photo: RNZ / Harry Lock

Chris Brady lives on Main Street in Hospital Hill - the area where authorities are most worried about slips.

He and a friend rushed to help a woman buried up to her chest in a torrent of mud that had swept through the backyard of a nearby house.

Brady says he could not get through the torrent of water coming down the hillside but his friend, who made it round the back of the property, eventually pulled the woman to safety.

He said it could have turned out a lot worse.

"The lady was obviously in shock when they got her out. There was a couple of young kids in there, with their parents, and a couple of other tenants. It was a fairly full house and they were all just bloody lucky." 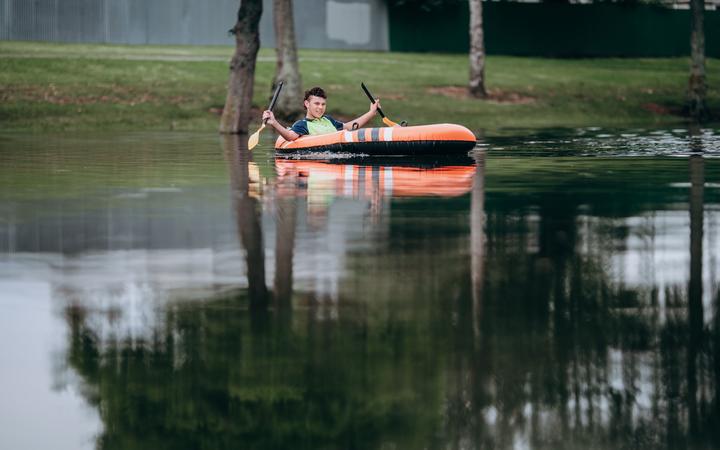 While some people narrowly avoided tragedy, for others the deluge simply meant it was time to take advantage of all that water.

"[We] figured we'll just go to Warehouse, buy an inflatable, have some fun - why not?", one resident said. "It's not all about disaster, you can come out here, have some fun while you're doing it."

Jacob Satherly said you need to take the opportunity when it presents itself.

"It's only meant to be a little creek, but this is a bloody flood here!"

He said he'll probably be back out on the dinghy today.

Meanwhile, the council is now trying to sort out long-term accommodation for those who won't be able to return to their homes.

More rain is forecast and the heavy rain watch remains in place until 8pm on Wednesday.