Opponents of an Auckland art exhibition which featured neo-Nazi flags and symbols of white nationalism have received an apology from one of the exhibition's co-facilitators, but say it doesn't go far enough. 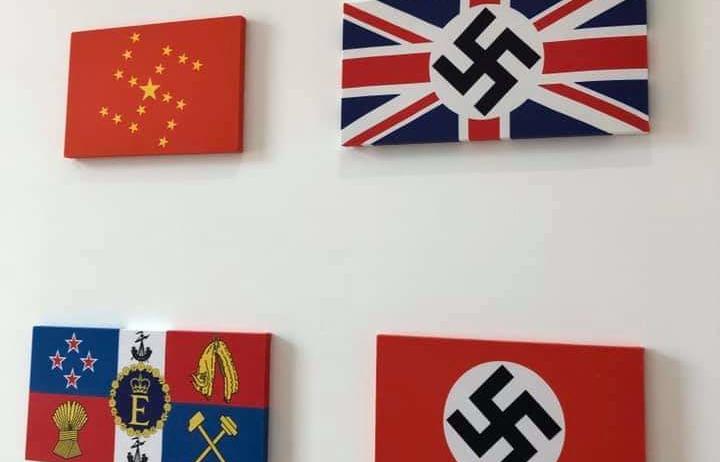 The exhibition by Mercy Pictures gallery closed last week, but has come under intense scrutiny by locals and activist group Tāmaki Anti-Fascist Action who believe the display, which did not include context or justification, was deeply hurtful.

In a statement, a spokesperson for the group said many of the images used were clearly symbols of oppression, disguised as art.

"We were profoundly troubled by its extensive and uncritical use of neo-Nazi symbols, which is a form of platforming their ideology. We've found this especially frustrating when we and other community groups have put in so much effort to deplatform fascists before and following the Christchurch massacre," they said.

The group was also concerned that neo-Nazi symbols were displayed alongside the Tino Rangatiratanga and Ngāi Tūhoe flags, without permission from tangata whenua. 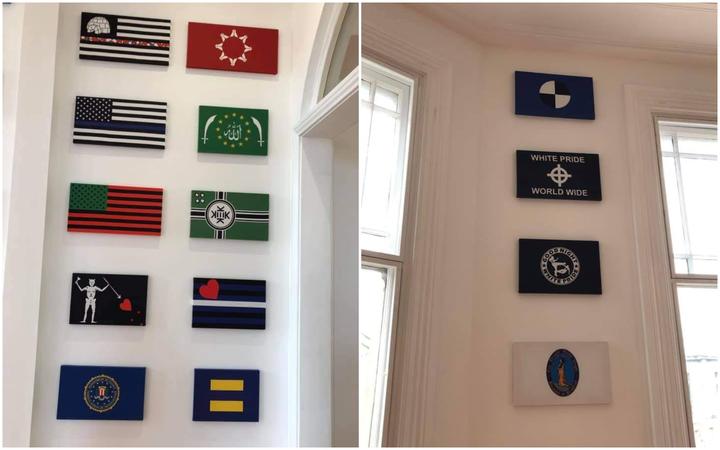 The spokesperson said the company as a whole had refused to apologise but co-facilitator Jerome Ngan-Kee had since taken it upon himself to express his regret.

"I would like to sincerely apologise for the harm and re-traumatisation brought about by the exhibition I played a part in putting together ... I deeply regret the way Mercy Pictures has responded to criticism and the pain that this show has bought about. It was irresponsible of me to assume these symbols and our action in displaying could deny their meanings and histories to extended communities," he said in an open letter.

"I regret in the strongest way possible the display of images and symbols related to terrible violence inflicted upon marginalised communities in the name of art. I recognise now this was a form of platforming fascist symbols. I apologise whole-heartedly for any detraction from the strength, mana and resilience of those people and for any pain that the exhibition caused them."

He also acknowledged that he would not work with Nina Power in the future, and said he would meet with the communities he had harmed face-to-face.

An open letter is circulating online to condemn the exhibition, and demand an apology from the entire company.

The letter also calls for the company to refuse to work with Nina Power in the future, no longer platform fascist and other far-right figures, and to apologise to tangata whenua for displaying their flags without permission.

In a statement, Mercy Pictures said it rejected any suggestions it supported far-right or extremist movements.

"It has been heartbreaking to see some of the responses to the exhibition. We find it very upsetting that some people have felt unsafe as a result of this artwork and we take these responses very seriously.

"Mercy Pictures believes extremist movements of any kind are malevolent and evil. We oppose these kinds of groups vigorously, not least because they put the lives of the people we love at risk. Mercy Pictures and the wider Mercy Pictures family is predominantly made up of queer people and people of colour. As such, any suggestion that we are alt-right, neo-Nazi, queerphobes, homophobes, xenophobes, and white-supremacists is offensive and untrue," it said.

It said the 'People of Colour' exhibition had no formal relationship to any other artist or organisation.

"The artwork is comprised of over 400 flags: national flags, political flags, religious flags, fictional flags, and flags from the internet. Our intention with the exhibition was to explore the dangers of political and tribal identities. This is an ongoing and dynamic conversation we wish to be a part of and in some way foster. We were asking questions like 'What does it mean to identify with a flag?' and 'What are we to do when a flag means different things to different people?'

"We recognise that balancing artistic freedom and community safety is a difficult task. In retrospect one thing we could have been better at is providing some more context to the show, to guide viewers that the exhibition is about the complexity of these symbols. We are in the process of reaching out to groups that may have been affected by the exhibition. It may take some time to organise, but we have begun this process and we are grateful to those who are offering us guidance. We will release more information about this as things proceed."