People who say there's no racism in New Zealand aren't listening to the communities saying they're being hurt, Filipino comedian James Roque says. 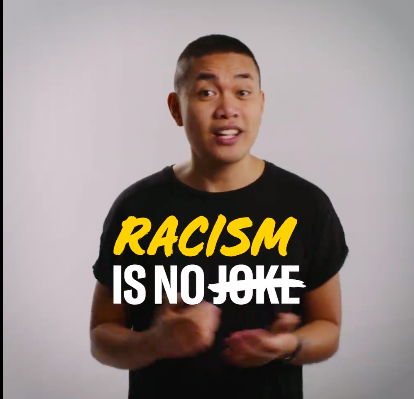 Roque is the face of the Human Rights Commission's new campaign - Racism is No Joke, launched in response to Covid-19-related racism.

Roque said there had been a huge spike in racism aimed at Asian New Zealanders since the outbreak, including online jokes, memes and comments.

The Racism is No Joke campaign is a series of videos and a community focused Facebook and Wechat group to share resources about racism with members of Asian communities, and to offer a forum for sharing experiences.

The campaign was set up after the Human Rights Commission and Office of Ethnic Communities heard from communities about increases in verbal and online abuse.

"When people put their feet in other people's shoes and the victims' shoes, they will think 'wow, that could be me', and hopefully they will curb behaviour and also they could be an anti-racist as well, so hopefully we can actually change behaviours through this campaign."

Roque said the target audience was people who didn't realise their jokes and actions were contributing towards oppressing people.

He said when he first started comedy he'd also make jokes about his ethnicity.

"The types of jokes I would make about my ethnicity were very self-deprecating. they were funny and they were good jokes, they were well-written jokes, but at the expense of my own identity as an Asian New Zealander. They would get laughs, but I think eventually over time I realised I didn't need to do that in order to get the laughs," Roque said.

"It was about five or six years ago that I realised, oh no, I can use this to make points that would be tough to swallow in real life for some people."

Roque said he under-estimated his migrant parents growing up and it wasn't until his 20s that he reconnected with his roots.

"That's really the crux of why my first jokes were self-deprecating, because you want to fit in. And so what you do is you erase who you are and try and take in as much as who they are in, to go 'don't worry, I think these things like you guys do'. That was part of my growth, in my 20s, to realise your background and culture are things to be proud of."

He said people overseas were often naive about New Zealand, thinking it was a "perfect utopia" with no racism.

"I would classify New Zealand as on the surface very accepting, but systemically not very...so like, yes you get here and people are friendly, people are accepting, but there are still things in the system that made me feel like an other, for example, not seeing yourself on television."

He was optimistic attitudes were changing, but said it needed to be a sustained effort.

"It needs to be something we always keep in check, that will eventually turn that tide."

Roque said some people had responded to the campaign saying there's no racism in New Zealand.