Former police are questioning why an officer did not have backup with her in the car, when she was shot at by two men in Northland on Tuesday morning. 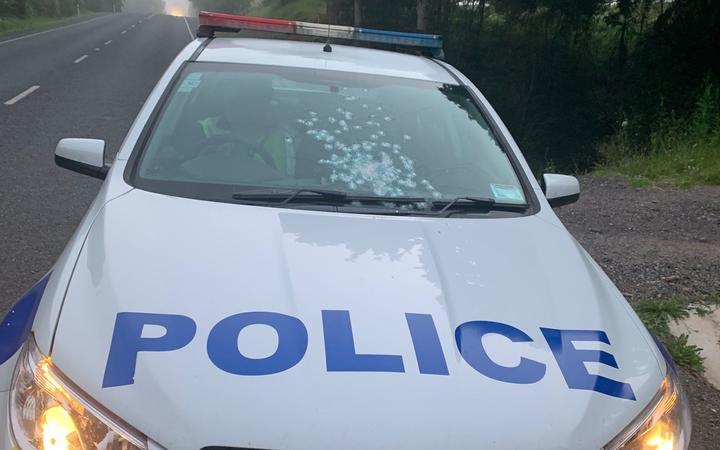 The police car that was shot at in Northland in the early hours of Tuesday morning. Photo: Supplied / NZ Police

They say the attack might have been different if it had happened in another part of the country where working alone is not the norm.

Three days after it happened the attackers remain at large and officers north of Whangārei are continuing to carry firearms, while appealing to the public for any information.

They say the officer is being supported, after escaping harm by reversing her patrol car to safety.

Former police negotiator Lance Burdett said the officer would have had a panic button in her car, and a radio to speak to other police staff - but he is surprised and dismayed she had to "face the unexpected" by herself.

He said working alone was never the norm for officers during his 22 years as a 111 shift manager, covering callouts from Northland to Taupō until six years ago.

"When I was in charge of staff there was always a two-person patrol at all times. If there was someone by themselves, they were doing work and the officer doing correspondence, so certainly not on the street by themselves" he said.

Other former police say there are no hard and fast rules about working alone, but it is a reality, especially in rural areas.

Whangārei district councillor Gavin Benney said he attended callouts alone during 30 years as a Northland police officer, and constantly argued about it with the higher-ups.

He felt sorry for the officer involved in Tuesday's incident.

"You get called out in the middle of the night - this was four in the morning. She would have gone to the incident not knowing what to expect and every situation is different. Having the tools to be able to do the job is the most important thing," he said.

"She would have gone to this unprepared and not knowing what's going to happen, which is one of the excitements of the job but it's also one of the dreads. This is one of the situations that would have been dreaded by every cop that's ever been by themselves."

Northland MP Matt King had also worked alone in his years as a police officer.

He agreed it "doesn't get much worse" than encountering people with guns on a remote road, alone at night.

"Positions need to be back-filled and the front-line is where they come from. I've been in this situation myself working one man in the middle of the night, 15 years ago, and there was no backup. It's not acceptable," he said.

The two men who shot at the police officer are still at large, which King said was "terrifying."

Police in Northland are carrying firearms while they investigate a possible link to a kidnapping in the area, at the same time.

Burdett said being armed probably would not have made much difference for the officer who was shot at.

"With all of these sorts of incidents the best thing you can do is get out of the situation immediately, regroup and then go back and find the people later. That was the exact thing that happened."

Police declined to be interviewed, but confirmed in a statement "single crewing of police units is not uncommon and it occurs across the country, however it is more prevalent in rural and isolated areas".

"When a unit attends a job and is single crewed they go through the same TENR (threat, exposure, necessity, response) process as they do with all jobs," a spokesperson said.

"Dispatchers in our Communications Centres will consider staff safety as a priority in both the selection of which units to deploy and also any instructions they are provided."

They said the "particular circumstances" of Tuesday's incident would be debriefed.

In an earlier statement, police said members of the public had come forward with information about the shooting, and they were still interested in hearing from anyone else who knows anything.