Top clinicians say chronic pain services serving one of the country's largest patient groups are being starved, which is crippling lives, and unnecessarily burdening families and society. 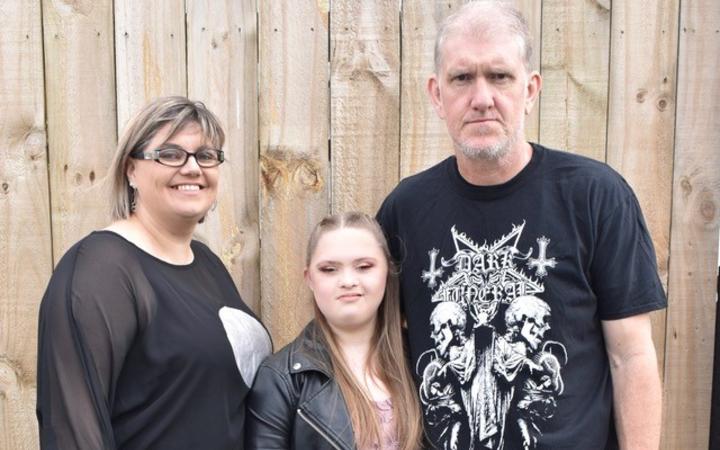 Dr Tipu Aamir, chair of the NZ committee for the Faculty of Pain Medicine, says chronic pain is the leading cause of disability in New Zealand, and early intervention and specialist treatment could help many who are suffering to live better lives, and keep their jobs.

Both have called for pain specialists to be provided in all areas of the country, and the funding to be ring-fenced.

Tarryn Attwell has Down syndrome, teaches sign language classes, has a business selling her own sign language merchandise and goes to cheerleading classes.

The 20 year old is known for being bubbly, active and outgoing, but for the last few months has been doubled up on the couch in level 10 pain.

Her mum Ally Attwell says that's not normal for her daughter, who has a high pain threshold and has barely even complained about broken bones before.

Tarryn was admitted, but told there was little they could do to diagnose the problem or provide long-term treatment.

They were told her pain has gone on long enough it's now classified as chronic pain, the chronic pain unit had just lost their one remaining staff member, and other speciality areas weren't able to take on chronic pain patients.

"The doctors and nurses at the hospital have been amazing, and they've been trying to look at how they can do it. It's the system ... the system had no way of supporting them," Ally Attwell says.

"So they had the acute pain team coming around to see us and and checking in on us, but they're acute pain not chronic pain, so there was nothing they could really do."

After being approached by RNZ and the local Labour Party office, MidCentral DHB - which runs Palmerston North Hospital - assigned a medical team to investigate care for Tarryn past the short-term immediate treatment.

But Ally Attwell says there's no diagnosis or long-term answers yet, other than morphine and tramadol she has to administer at home.

The DHB confirmed to RNZ that there would be no staff in their chronic pain unit until next year due to a resignation. They said while there are no chronic pain services for outpatients, acute pain and anaesthesia team members were assisting with inpatients, and outpatients were being managed by GPs.

Dr Lennox Thompson said the root of the problem is nationwide, and it's destroying lives.

"There's no obligation from the Ministry of Health for chronic pain services to be provided. There's no official level of care.

She said patients who qualify for ACC are often referred on to private services, but those who don't are left relying on their DHBs.

A Ministry of Health spokesperson said DHBs aren't required to offer chronic pain services in their own area, but there are specifications for them to fund them somewhere. They said this means patients should be able to access care through another DHB if their own doesn't offer it.

"As funding for pain management services is devolved to DHBs, they are responsible for determining the service mix that best meet the needs of their populations within the funding available," they said.

"In particular, consideration is given to the likely benefits of the service for the individual, relative to the costs of that service and consideration of the benefits if those resources were directed to a different service or another individual's treatment."

But Dr Lennox Thompson said the service is so essential and demand so wide, patients should not have to travel outside their DHBs area, which in some cases is very long distances.

She said Starship Hospital offers an excellent chronic pain unit, and is a good example of what can be done, and the benefits to people's lives

"In New Zealand there is currently 14 to 15 full time equivalent positions for pain specialists in the whole country; the recommended specification is one pain specialist per 100,000 of population.

"We should have ideally 50; we have only 15 positions. So that gives you an idea of how far back we are."

"We need to do a lot of work. All local DHBs should have an interdisciplinary pain service where people with chronic non-cancer pain are seen."

Both Dr Aamir and the Ministry of Health spokesperson said the Ministry's own advice recommends multi-disciplinary teams be available, which should include pain specialists, as well as capacity to provide appointments with 'allied services'; physiotherapists, psychologists and occupational therapists.

However, Dr Aamir said right now the burden of care for these patients often falls on GPs, who are left doing what they can without specialist skills or the resources to support this group well.

"The reality is that in a 15 to 20 minute GP assessment, GPs don't have enough time to really deal with the complexity of the patients.

He called for more services to be provided within DHBs at the community level, and for funding for specialists to "be ring-fenced".

Ally Attwell said that since she's been investigating help for Tarryn she's now heard from many chronic pain sufferers who say they've had little medical support, and is shocked by the extent of the problem

A GP has referred them to a chronic pain service at a neighbouring DHB, and Ally Attwell said they were initially told by the service that most people wait months to be seen, and some won't even get an appointment despite a referral.

"They told me it was going to take months, that just was too long for me watching my daughter lying on a couch not moving and not wanting to eat, and me having to pump her with all these opiod drugs to keep her semi-functional.

Tarryn has now been accepted to be seen by the neighbouring DHB's service, but Ally Attwell said it has been a rollercoaster.

"I think it's not okay, I think we need someone here."

She said the rigmarole to get help has been especially frustrating because two years ago Tarryn had a similar pain, but fell under Starship Hospital's care. They were able to offer a one-off treatment that took the pain away long-term.

She wants this tried again, but despite agreement from individual doctors, has been told by both DHBs that it's unlikely to be made available to her through the public healthcare system.

Ally Attwell said it's heartbreaking that a group of people already suffering overwhelming and debilitating medical conditions are left to fight for the level of help most Kiwis would assume they were entitled to, and she believed chronic pain sufferers have become a marginalised and forgotten group.