A Hawke's Bay railway line that cost millions to resurrect ran for just one week before Covid-19 stopped it dead in its tracks. 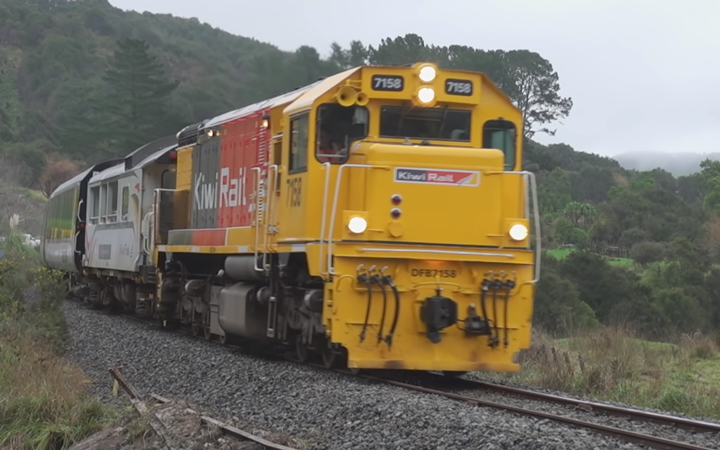 The return of the Napier-Wairoa line was promised as a saviour for Hawke's Bay and the forestry industry.

Now KiwiRail is keeping quiet about when exactly it will restart again.

Following a $6.2 million investment from the provincial growth fund, the line was reopened by the then regional economic development minister Shane Jones in June last year.

But logging trains only began running on 26 January 2020.

A week later, and after just six return trips, the trains were brought to a halt.

KiwiRail said it shut because of Covid-19's impact on the forestry industry.

"When they work out that their hard-earned tax dollars have gone into such a project that has achieved so little at this stage, they are concerned," he said.

"They spent a lot of millions of dollars getting this project off the ground and then not using it, it does appear to be a bit of a waste of time."

But Ken Crispin of Napier - a passionate advocate for rail - disagreed.

He said people must look beyond the short term.

"You've got to look at it in long-term. I think if you talk about it in terms of one year or three years that's not good enough. You've got to build a rail line and then promote it."

Crispin said the Napier-Wairoa Road (State Highway 2) was dangerous and the big trucks were making it worse.

He was not against roads, but said there needed to have less freight trucks.

"There's no way in the world that these trucks should be using that road. That road is not designed for heavy trucks. If a truck is a 60 tonne truck, it's compacting that road and I think everybody knows it's like a golf course now, there's more holes in the road than there is a road."

Stephen Bell is co-chief executive of Forest Management NZ in Napier. His company manages 26,000 hectares of forest over the country.

He said using rail was all about whether it was cost effective for his clients.

"We've always supported rail and we will continue to support rail. But the main driver for us is to make sure that it's not costing our client.

"There's a couple of reasons to support rail and one is it does remove trucks off the roads but it also allows quick turn around times from our logging sites in and around that Wairoa area to the actual rail hub, as opposed to carting it all the way to ports or the domestic mills."

Kiwi Rail chief operations office Todd Moyle said in a statement the rail services are due to restart later this year. He did not give a date.

He said it would begin with two return trains each weekend, of 24 wagons - each trip taking 24 trucks off the road.

"Rail infrastructure investment has multiple, long-term benefits, some of which are not immediately obvious," the statement read.

"For example, moving more logs by rail instead of trucks reduces road maintenance costs and congestion and improves road safety - particularly on regional roads like those between Napier and Wairoa which were not designed for heavy trucks.

"When the logging trains are fully up and running, close to 13,000 truck journeys a year will be avoided."

He expected trains to run daily when the line was at full capacity.