Domestic cats in Kaikōura are laying waste to the eggs of a rare shore bird. With only 18,000 of them remaining, the banded dotterel is classed as nationally vulnerable. 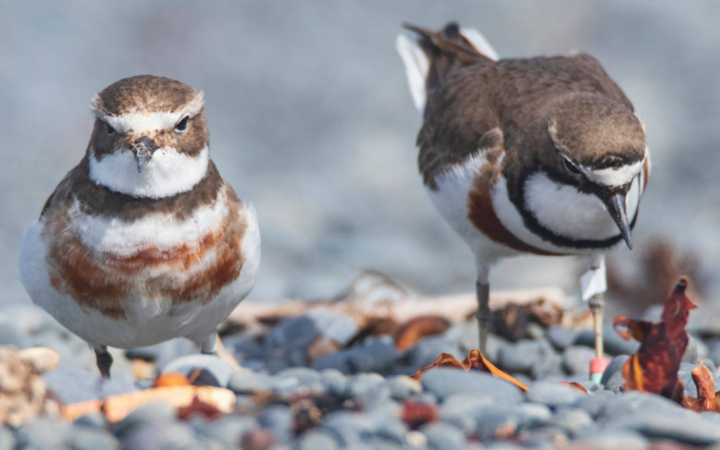 Some of the banded dotterels from Kaikōura's South Bay. Photo: Supplied

That status is not being helped at Kaikōura's South Bay, where so far this breeding season 17 of the 22 nests spotted have either been destroyed, abandoned by the parents, or the eggs eaten.

Each day during the breeding season from August to February, Ailsa McGilvary-Howard, who leads the Banded Dotterel Study, checks in on the stretch of beach at South Bay.

McGilvary-Howard believes almost all of the destruction of the nests is by cats, some of which are caught on motion-activated camera visiting the sites.

"We've got two (nests) where there are really strong cat marks all over them every night, and this is three different cats, and the others (nests) are untested as we've only got the resources to look for what we think are the most severe issues on the adult birds."

She said she knows one nest was washed away and one preyed upon by a hedgehog, but the rest she believes have been wiped out by cats.

On Thursday night they suffered another loss, with a ginger cat killing an adult bird as it tried to protect its newly hatched chicks; the only chicks which had successfully hatched this season.

By Friday night those chicks had died.

McGilvary-Howard said she had watched the parent bird at the site for four years, and to see it killed was devastating.

"I don't know what to say. I'm absolutely gutted. Anguish would be the thing that people who study a species and watch it fail, it is just one of the things that happens to us. But I also have a heart to have a conversation about animal responsibility. I mean we can have both cats and birds."

McGilvary-Howard said adult birds will scatter if a cat approaches when they have eggs, which leaves the eggs susceptible becoming non-viable if their temperature drops, but once the chicks hatch, the parents are more at threat because they will stay if a cat attacks.

She is pleading with local cat owners, especially the owner of a large ginger cat, to keep them in during the breeding season, at least at night. 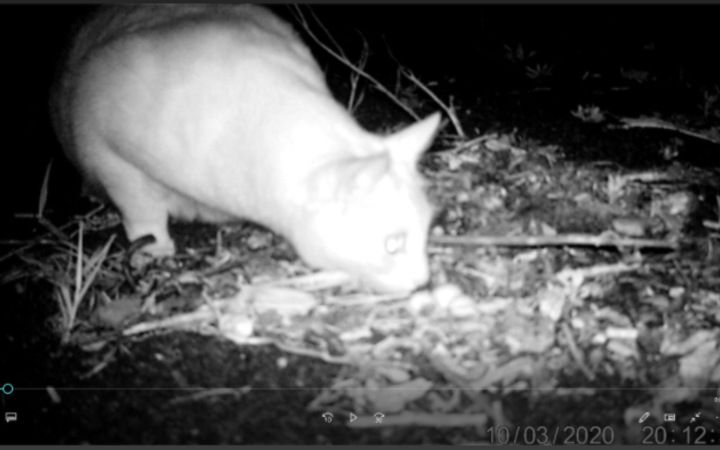 One of the cats regularly seen prowling around banded dotterel nests at South Bay. Photo: Supplied

Conservation scientist John Dowding said banded dotterels can have more than one set of eggs during their breeding season if the first lot fails, but he said the loss of an adult bird is huge.

He said an increase in predator control, including reducing the number of stoats and hedgehogs along with cats, would certainly be a big help for all small shore birds.

"We do a lot of very good work in conservation in New Zealand but I think we've getting a bit behind the eight-ball with cats. In some parts of Australia there are curfews, and if your cat is found out at night, that is the end of your cat."

He said New Zealand should also consider this option.

Emma Williams, the Department of Conservation's mobile terrestrial threatened species science adviser, said banded dotterels are one of the most threatened mobile species, because they need a network of safe sites. 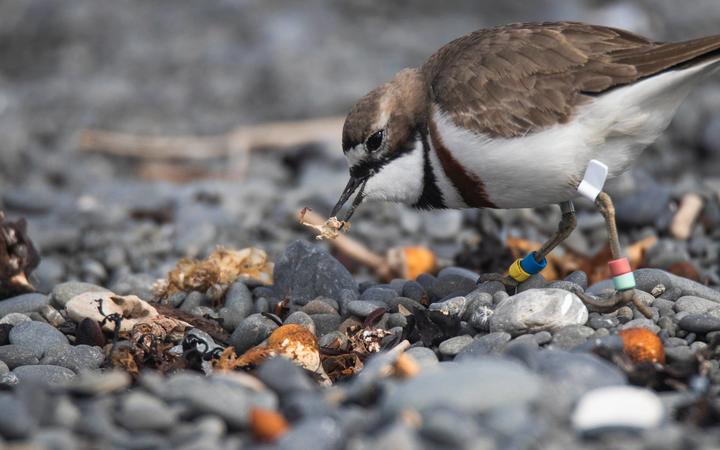 She said invasive mammalian animals are the birds' biggest problem, but they face other threats too.

"Habitation degradation is also a problem, weed encroachment particularly in braided rivers, gravel extractions, disturbances such as vehicles, people on the beaches, dogs off leash they all cause the decline of the species."

Williams said banded dotterels often congregate at key sites where conditions are good for them, and people should take extra care at these locations which frequently have warning signs put up by DOC or local bird lovers.

In Kaikōura, McGilvary-Howard said if anyone had information about the large ginger cat that has been attacking birds at the South Bay site, she would love to hear from people via her Facebook page.