Ken the kea getting to know the neighbours in Nelson

He's not your usual Sunday morning visitor, but a cheeky kea has managed to let himself into a Nelson living room as part of his new routine of calling in on houses in a suburban neighbourhood.

While backyard tui and weka are common in Glenduan, Ken the kea is a new addition - and he's making himself quite at home.

Ken has been taunting pets, tearing up gardens and taking bits and pieces off houses.

Vanessa Gay was paid a visit by Ken last week - she woke to the sound of her cat making a commotion in the living room.

While she initially thought another cat might be trying to come in she discovered her cat was about half a metre away from the kea, who was sticking his beak through the door.

"Because we're in a residential area, it's really strange to be seeing a kea," she said. "He kind of shooed outside and then proceeded to play with the items around the deck and in the garden ... when I went outside to go and see what he was doing, he would try and chase me back inside"

Ken seemed to be very comfortable about humans and not frightened of cats or dogs, Gay said, describing the kea as "very playful, very inquisitive and very bold." 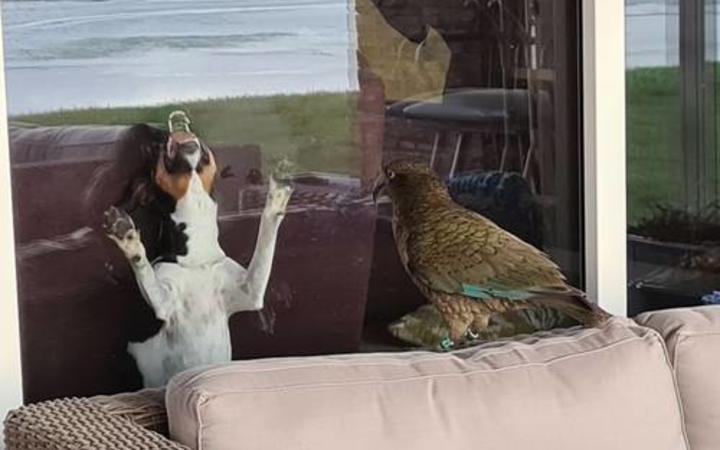 While she had tried not to engage with the bird too much, she suspected he had had some positive reinforcement from humans before, which was "concerning".

She had been told by the Kea Conservation Trust that Ken was a young male - and as it was breeding season for keas, he had left his group to go exploring.

"He's just like a young male bird  trying to find his own way and hopefully he'll go back and find some other lovely keas to hang out with," Gay said.

"He's very, very engaging and you do want to interact with him because it's such a privilege to have sight of him and to be able to see him, but it's not good for him, or us, or the community to have him sticking around."