A man has described hearing "horrific" screams on the Taupō lakefront at the same spot a member of the public found two bodies. 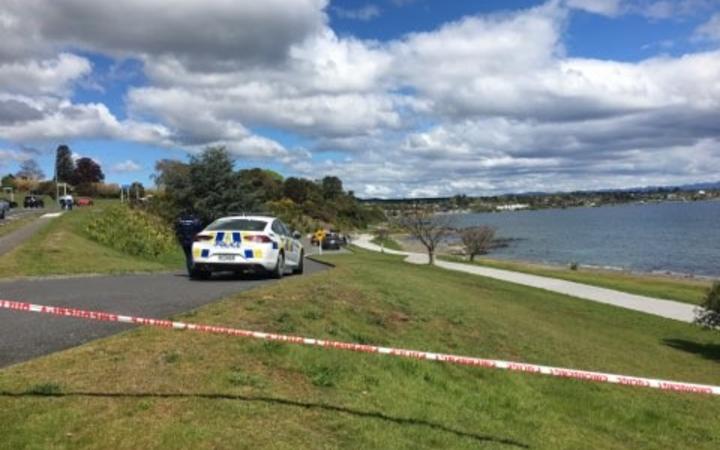 Police at the scene in Lake Taupō where two bodies were discovered. Photo: Hugo Cameron

The bodies were located a short distance from the town centre near Mere Road on Friday morning, with police yet to confirm the people's identities, or the cause of death.

The local man - who did not want to be named - had been at the very same spot for a swim last evening with his wife and a friend, until about 7.30pm.

He remembered three other people being there, by the time he wandered across to a nearby motel for a spa.

Screaming prompted him to race back.

"It was a horrific noise," he said.

"Like a... deep whining. 'Come on', I said, 'let's get in the car'. Coz, you know, it was like someone was getting hurt. So we drove down there. But as we were driving and turning down to get to where they were, we saw the cops had just left. So we thought, sweet as, they must have sorted it out."

The man recalled seeing one person swimming, one person on the shore, and and a third person drinking in the carpark near a black SUV, which was still at the scene today.

He couldn't fathom what prompted the screaming, but thought it was unusual someone was still swimming when the temperature had plummeted to about six degrees.

He said he felt sick and sore in his stomach when he read about the bodies discovered this morning.

The man said the area on the lakefront is a popular swimming spot, treasured by locals for its geothermal properties.

"It's been around for ever since I was a kid and it changes its landscape every year just with the different weather, with the lake dropping due to no rain, and stuff," he said.

"With the geothermal action in the lake... actually you can dig your feet into the sand and the water comes up hot."

It's unclear if the two bodies were pulled from the water or located on the shore, but emergency services were called 7am, and soon after that a police forensic tent set up near the water.

That drew the attention of locals like Baycrest Lodge owner Barry Searle.

"I took a wander down and saw, certainly a lot of police activity and the covering of what appears to be a couple of bodies in the pools. There's a tent covering the pools and the scene guard and a number of cars," he said.

Taupō mayor David Trewavas said there had been a flurry of visitors to the town in recent weeks.

He commended the member of the public who found the bodies and called emergency services, although "unfortunately, it was too late."

Trewavas said the town had woken to a beautiful central plateau day but with "tragic circumstances for the families involved."

"The lake is pristine and the mountains are full of snow. Such a beautiful day to have this unfold. This is very, very tragic," he said.

Police officers at the scene confirmed they had removed the bodies this afternoon.

A rāhui has been placed at Taharepa Baths on the Lake Taupō waterfront by Ngāti Tūwharetoa following the deaths.

The rāhui - which will continue until 4pm on Monday - applies to all access and recreational activities in the area, including the lake foreshore reserve and the lake itself.

While the Great Lake Pathway remains open, the public toilets and carpark have been closed.

In a statement, a spokesperson said they were continuing to make enquiries and awaiting post mortem examinations to determine the cause of the deaths.

Police declined to be interviewed for this story.