RNZ's podcast Crimes NZ looks at the infamous 1954 Parker-Hulme murder case in Christchurch, while The Detail investigates whether a renewable energy goal is a victory or a diversion and the Caucus crew break down this week's campaign highlights. 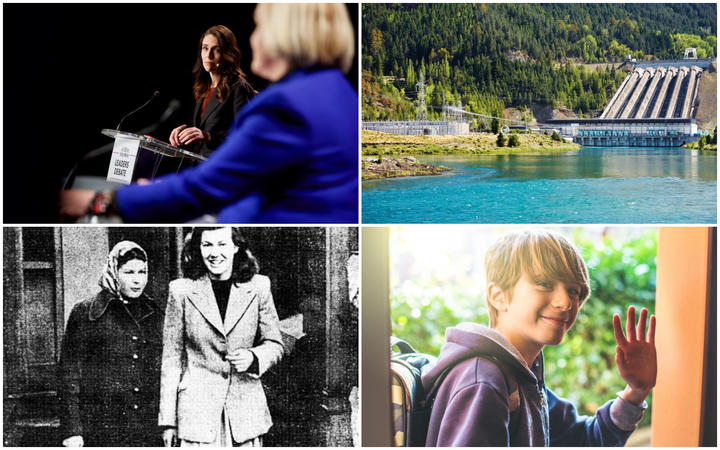 Crimes NZ this week looks at the infamous 1954 Parker-Hulme murder case in Christchurch where two teenage girls brutally murdered the mother of one of them, as well as the murder of Swedish backpackers Sven Urban Höglin and Heidi Paakkonen in 1989 and the murder of 15-year-old Canterbury teenager Kirsty Bentley who went missing after taking her dog for a walk on New Year's Eve in 1998.

You can check out all the Crimes NZ cases here.

The Detail's Jessie Chiang speaks to Newsroom political reporter Marc Daalder about the business case for pumped hydro storage at Lake Onslow in the South Island. Daalder says that electricity generation only makes up 4.2 percent of New Zealand's emissions, while agriculture comprises 48 percent and transport makes up 19 percent.

In The Citizen's Handbook: Election Special Robbie Nicol is back with his own unique guide to navigating this year's election and referendums with topics like voting, cannabis and euthanasia.

Or for a more serious take, join the Caucus crew to break down the week's campaign highlights. This week Guyon Espiner, Lisa Owen, Tim Watkin and Scott Campbell discuss how a leaked email and a walk down Ponsonby Road in Auckland Central reminded voters that National has been a party divided this past term and that a couple of leaders' debates don't heal all wounds.

As children grow up and venture out into the big wide world on their own or with their friends, Katy Gosset looks at how adults can allow them to spread their wings and manage their own anxieties in her podcast Are We There Yet?

She talks to clinical psychologist Catherine Gallagher who said it was a matter of looking at "what kids are generally capable of and giving them a bit of extra freedom around that".

And finally Generation Next is a great series about young people pushing for change in their communities with the first few episodes dealing with the online Pacific Votes Count campaign, Sana Ditta, a young Muslim woman who lived through the Christchurch earthquakes and terror attacks and Mez and Mahlete Tekeste who organised a Black Lives Matter march for solidarity in Auckland.