A Lake Ōhau Bed and Breakfast owner says he has lost his home, business and loving memories in the fire that has torn through his small Canterbury community. 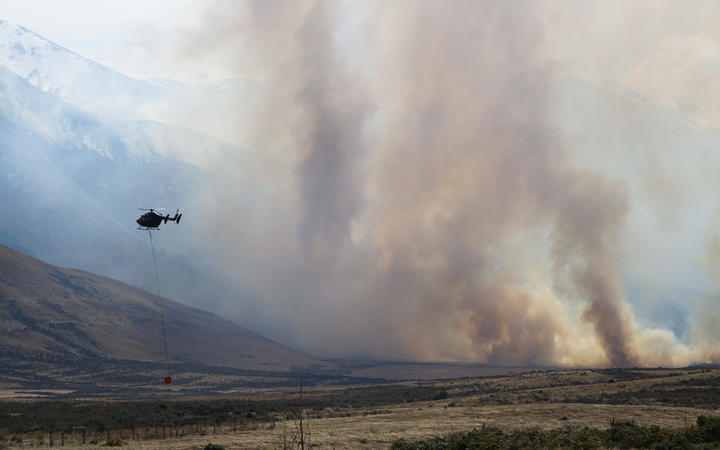 A helicopter battles the fire at Lake Ohau in the Mackenzie Basin. Photo: RNZ / Tess Brunton

Approximately 4800 hectares of land has been destroyed by a fire that ripped through the area on the weekend.

According to Waitaki Mayor Gary Kircher the majority of properties in the Lake Ōhau village have been destroyed by the fire.

Owner of Barn at Killin Bed and Breakfast Hugh Spiers described the weekend's events as surreal.

"You can't imagine the fear, the worry, the unknowingness and the panic of escaping a bushfire... a horrible fire," he told Morning Report.

"Well and truly 24 hours after it and it's still a blur."

Spiers said he was awoken during the night to a phone call telling him and his guests to get out as quickly as possible.

Still in his pyjamas and gumboots, he was able to wake his guests and rescue his dogs before fleeing.

"We see these scenes on television of the forest fires in Australia, the bushfires, and what's happening in California, just horrific, horrible... God it was like that, the noise, the heat, the sparks, the smell of smoke, the taste of smoke in your mouth was horrific.

"It was like a scene from Gone with the Wind ... it was going with the wind.

"We were driving to get out of our place, we have to drive through a wooded area, there was fire on both sides so we had to do a [u-turn]."

Spiers said the situation became more frightening when his guests ran into trouble trying to escape behind them in their car.

"We went down towards Lake Middleton [adjacent to Lake Ohau] to get round into the camping area ... we got through in our four-wheel-drive but our guests got stuck in the bog right on the lake, so we couldn't even push them out, it was just horrific.

"They jumped in our car and we just got the hell out of there as quick as we could... I think their car is half submerged in the shores of Lake Middleton and it appears to be okay but the bush, or the paddock, around it is just charred."

Spiers said he's lost four generations of memories, happiness and love at his home and business.

"But you can replace those things you know? We've just lost everything.

"We've been overwhelmed by the love from all around the world and our lovely community of Lake Ōhau village, we're strong together. The wider community, the Twizel area and Omarama ... the love and support, the cups of tea, the food.

"We've had a crappy year, this is total crap ... we've just got to embrace all that love that surrounds you and go with it, we're not going to go this alone. We're lucky that no one has been hurt."

Fire crews are still battling the blaze which Fire and Emergency's Incident Commander Steve Jones said is contained, but still has hotspots that require putting out.