The Ministry of Health has identified a rubbish bin as the probable source of a recent Covid-19 case - a similar event to the case of a worker in Auckland who was infected by a lift button. 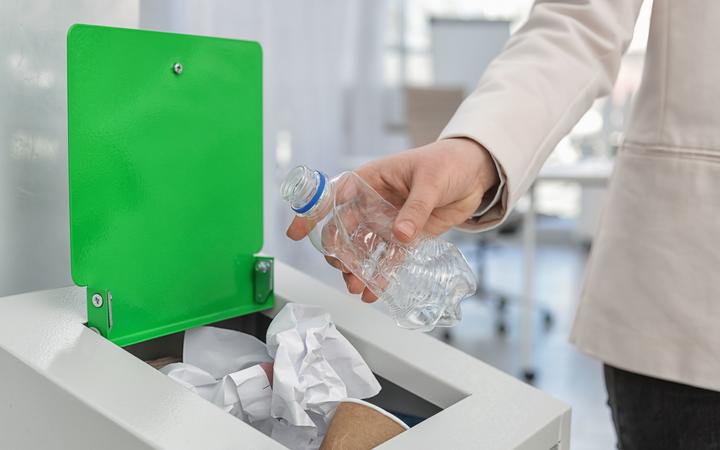 The case centres on two travellers who were staying at an isolation facility in Christchurch.

The first case was a person who, after arriving from Delhi on 27 August, returned two negative tests during their stay in managed isolation.

The person then travelled on a charter flight with other returnees from Christchurch to Auckland on 11 September.

"While we cannot be conclusive, we believe this person was likely infected on the charter flight by a person seated behind them, who had also completed 14 days of managed isolation and returned two negative tests," the Ministry said in a statement.

"That person did not have any symptoms but tested positive for Covid-19 on September 23."

The Ministry said extensive contact tracing has not uncovered any other cases associated with the flight or the people's subsequent movements. It is now thought that the person reported on 23 September was still incubating the virus at the time of their 12-day test.

"While we cannot be certain, our hypothesis is that the virus may have been transmitted to a person (the 23 September result) via the surface of a rubbish bin which was used by another returnee who was likely infectious at the facility (a case from 9 September).

"This returnee tested positive on day 12 of their stay in managed isolation, however, they were likely infectious a few days before testing positive. They tested negative on their day 3 test as they were likely still incubating the virus."

Public health officials and staff at the Christchurch facility had carried out an extensive investigation, including viewing CCTV footage. A rubbish bin had been identified as a common factor.

"This is not dissimilar to the case at the Rydges [hotel] in Auckland where we believe a maintenance worker may have picked the virus up from a pressing a button on a lift shortly after someone with Covid-19 used it."

Both cases confirmed how tricky the virus could be, the Ministry said, and it can be transmitted via surfaces.

The bin in the facility was in the corridor. Dr McElnay said the rooms in the isolation facility were not being serviced by the hotel staff so people put their rubbish in the bins.

She said there was information and signage for them to use hand sanitisers.

"This particular bin had a lid that required you to lift the lid."

The Ministry of Health has now updated its Infection Prevention and Control guidance for facilities so that all bins in public areas in the managed isolation and quarantine facilities will now be no-touch and all rubbish will have to be securely sealed in plastic bags prior to disposal in the bins.

Speaking at today's media conference - where it was revealed there were no new cases of Covid-19 to report today - Director of Public Health Dr Caroline McElnay said there was a number of different ways in which the infection prevention could be prevented.

She said an additional step was to have bins that did not require you to touch in order to put the rubbish in.

She said regular cleaning of bins and hand sanitiser for people using the bins were already in place.