Police have arrrested 10 Extinction Rebellion protesters who had blocked the entrance to Bathurst's coal mine in Canterbury.

The Extinction Rebellion protesters are calling on theh company to shut down the open cast mine at Coalgate.

About 30 environmental activists, aged from 16 to 65, were at the entrance and a further 10 were at the pit.

Activists locked themselves inside and around two vehicles with chains, and some were hoisted high up on tripods.

At least six police officers arrived mid-morning, and used large wire cutters to open the gate which had been padlocked by the group.

Officers moved some protesters aside, escorting two workers through.

Inspector Peter Cooper said those at the pit were being arrested because it was beginning to snow higher up and there were safety concerns as the weather worsens.

Police were negotiating with protesters at the entrance who are sheltering from the rain under a tarpaulin.

Bathurst has applied for an extension to its 38ha Canterbury Coal Mine but the protesters want it shut for good.

The mine produces low sulphur coal, with much of it used to support the local dairy industry.

Activist Julie Thompson said the group wanted Bathurst to withdraw their request to expand the mine and would blockade the entrance until this happened.

She said the group had plenty of food to last them at least a week.

"We are in an ecological crisis and we cannot continue to burn coal the way we have been," she said.

The youngest of the group, Ciara Foley, said the impacts of coal were "devastating" and she wanted to do her bit to protect the future of the next generation.

Another activist, Zoe Deans, wanted the government to support Bathurst to transition into a clean industry and urged Fonterra to act quickly on their commitment to phasing out coal.

Bathurst Resources chief executive Richard Tacon said if the mine shut carbon dioxide emissions would go up as coal is transported longer distances to Canterbury customers.

He said the company supported a just transition to a net zero carbon economy by 2050.

Workers were sent home and the coal mine was not operating today. 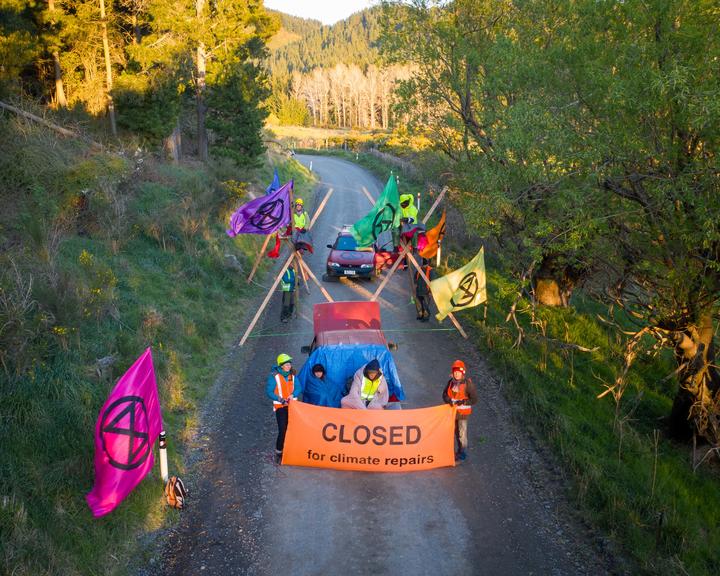 Protesters locked themselves around vehicles at the mine's entrance. Photo: Supplied