The FBI is offering more than $15,000 for information about a New Zealand man who fled the United States after he was charged with sex trafficking and child exploitation material. 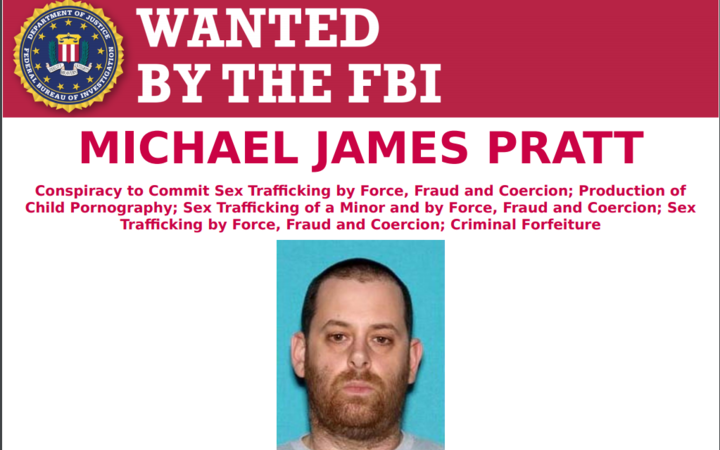 Michael James Pratt, 37, is wanted by the United States agency for his alleged involvement in a conspiracy to recruit young adult and minor women to engage in sex acts that were filmed, and distributed online between 2012 and 2019.

The former Christchurch man, whose alleged offending took place in San Diego, has been on the run since a federal warrant for his arrest was issued last year.

Along with fellow New Zealander Matthew Isaac Wolfe, who was imprisoned in San Diego earlier this year, Pratt owned and operated a pornography production company as well as the websites "GirlsDoPorn" and "GirlsDoToys."

According to the FBI, the websites generated about $26 million in revenue.

In January, in a civil case separate to the criminal charges faced by Pratt and Wolfe, a California court ordered the two men to pay $19 million in damages to 22 women, mostly students, aged between 18 and 23.

According to the judgement, the men advertised clothed modelling work on Craiglist in the US and Canada, then convinced young respondents to fly to San Diego to shoot pornographic videos and photographs, promising anonymity and fees of up to $10,500.

"Defendants assure the women that the video will never be seen by anyone they know because it will only be distributed on DVD in a foreign country; it thus will never be available in the United States, and it will never be published online," the judgement reads.

But videos were distributed online, as well as being sent directly to members of the women's communities - in some cases to parents, siblings, sports coaches, employers, and university professors.

Approximately 60 emails were sent to one plaintiff's law school. The women's names and other personal information was also deliberately disseminated.

Pratt is described as being six feet tall, with brown hair, and hazel eyes. He is known to use 'Mark' as an alias.

Anyone with information about the whereabouts of Michael James Pratt is asked to contact the FBI in San Diego on +1 (858) 320 1800. Tips can also be submitted online at tips.fbi.gov.