Take a gander - a group of unrepentant undesirables are causing disruption near Rotorua's lakefront, holding up traffic and defecating on footpaths. 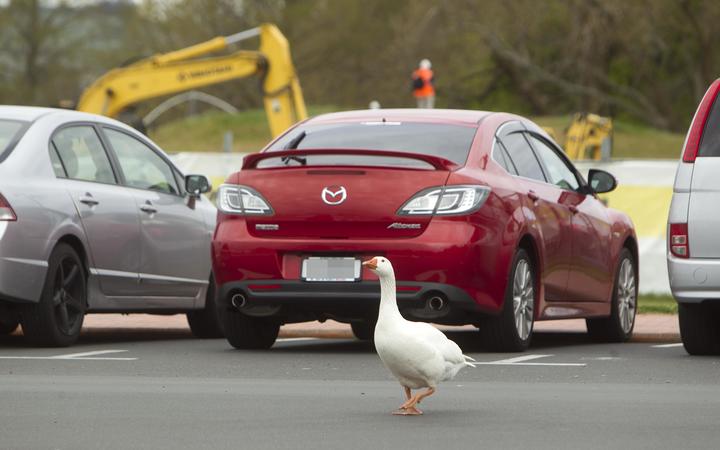 Geese have migrated away from the lakefront in Rotorua. Photo: Ben Fraser / Rotorua Daily Post

A gaggle of about 11 geese, which usually congregate close to the waterfront, have taken up part-time residence near the corner of Lake Rd and Tūtānekai St, and one nearby business manager says there has been a "total lack of responsibility" about what to do with the birds.

However, the Rotorua Lakes Council says the geese may have "migrated" due to the reduced number of people at the Lakefront.

Ryan Gray, who works nearby, said the geese crossed the road a lot and cars were forced to stop from running them down.

He said the feathered foes had been "a source of entertainment" for most nearby workers for a couple of weeks.

"From my office window, I have seen them sit down in front of cars and not move, cars beeping and swerving."

He said it would be "stink" if someone accidentally ran one over.

"I do wonder if [the council] considered it with the lakefront [redevelopment]."

Nearby business manager Barry Mabey had also seen the fowl gang standing on the road and defecating on the footpath.

He said he had contacted Rotorua Lakes Council, the Bay of Plenty Regional Council and the Department of Conservation (DOC) about the problem and "none want to take responsibility".

"It's not the geese's fault, it's just the [lakefront] development that's been going on."

Mabey said the issue had been going on for about three weeks.

He had been working at his business for three years and the birds had always stayed at the lakefront until recently.

He believed it was a district council issue "as they're doing the development".

"It's a total lack of responsibility."

Mabey said the geese have "got to go".

DOC senior adviser Herb Christophers said the department had "never had and never will have" responsibility for domestic geese as it was not a native species.

Bay of Plenty Regional Council biosecurity manager Greg Corbett said common domestic geese - such as those on Lake Rd - were not classified as a pest under the council's regional pest management plan.

"Therefore [the regional] council have no involvement in the control or management of geese within the region".

He said the lakeside redevelopment was the responsibility of Rotorua Lakes Council and the geese were located on the district council's reserve land and were best placed to address the issue.

Blue Baths managing director Jo Romanes said she wasn't aware of any issue with the geese for nearby cafe Terrace Kitchen, which is run by Blue Baths.

Rotorua Lakes Council sport, recreation and environment manager Rob Pitkethley said the council was aware the geese had "migrated" and that it had "caused some concern among businesses in the area".

The council had advised businesses to continually discourage the birds from congregating in the area, he said.

"It's also important that the birds aren't being fed by people as generally these types of birds will migrate to wherever there is food.

"A reduced number of people at the lakefront may have prompted the birds to move to a more populated area."

Pitkethley said Infracore cleaned pavements in the area every day as part of its regular cleaning programme, and the council was monitoring the situation to see if cleaning needed to increase.

"We will also keep an eye on the population of the geese and keep in contact with business owners in the area."

Asked what planning was done to mitigate the effects of the lakefront redevelopment on nearby wildlife, Pitkethley said there had been planning and monitoring of "any negative impact on protected species including kōura, the native scaup, and swans".

Last week, Pitkethley said the lakefront redevelopment was "about halfway through".

The project will cost $40 million, divided roughly in half between the Rotorua Lakes Council and the Provincial Growth Fund.