Heart breaking details have come to light about a four-year-old that died at a childcare centre, just one hour after being dropped off by his dad. 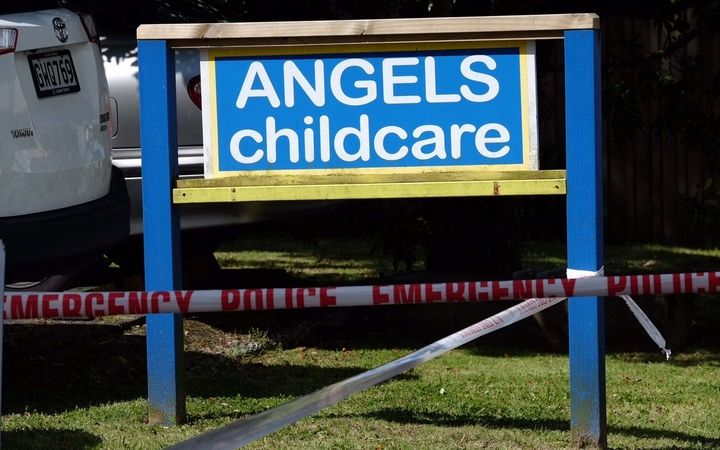 Workers from Angels Childcare Centre have relived the day Aldrich Viju died on their playground equipment in November 2016, at a coroner's inquest at the Auckland District Court today.

The boy's father dropped him off at the centre on Anzac Street, Takapuna on a Friday about 1pm.

"When he [Aldrich] arrived that afternoon, he ran in. He normally stays with his dad but he saw his friend and he was very excited," a teacher said.

She said the last time she saw Aldrich was holding hands with his friend while standing on a yellow box outside.

"He was laughing on the box".

She recalled, while holding back tears in the courtroom.

A former teacher at the school, Jiae Kwon, said she was playing a game with a group of children outside at the time, where they would race each other around the play area.

Shortly after the game finished, a girl came up to her and explained "Aldrich was sleeping and won't wake up".

After looking around, she found Aldrich unconscious on the slide, with a cord from a pair of toy stilts around his neck.

"His heart was beating but wasn't breathing," she said.

She immediately untangled him from the slide and administered CPR - while centre manager Karen Douglas called the ambulance.

Karen, who was visibly upset trying to think back to that day, said she initially didn't believe it was anything major.

"While on the phone I remember thinking it's all going to be okay. But when I reached the scene outside and saw CPR being administered, one of my biggest fears within the industry was realised," she said.

The teachers cleared the way for paramedics, but Aldrich wasn't able to be revived.

He died of strangulation.

Worksafe conducted an investigation and found there was no evidence to support a criminal prosecution.

Worksafe Health and Safety inspector Philip Cuff said the likelihood of the hazard being realised by staff was "unforeseeable."

"At no stage during the investigation did anybody think a rope could get caught on that slide, with its rounded and curved corners"

However, Angels Childcare Centre had made changes since the tragic accident.

Since his death, the centre no longer has stilts - and has banned anything which could strangle a child on the play equipment.

"Anything that can cause strangulation has no place in our centre" Karen Douglas said.

They've also replaced the slide, sectioned off an area outside with new fencing and put up a convex mirror to cover a blind spot outside.

The owner of the centre, Bryan McCloughen, said they're all still reeling from that awful day.

"We are deeply sorry for Aldrich's death. When he lost his life, it impacted us all at the Centre," he said.

The coroner has reserved her decision.