Auditors visited two companies associated with the Comancheros to look at their finances within a couple of weeks of each other, while police had them under surveillance months before their arrests, a court has heard. 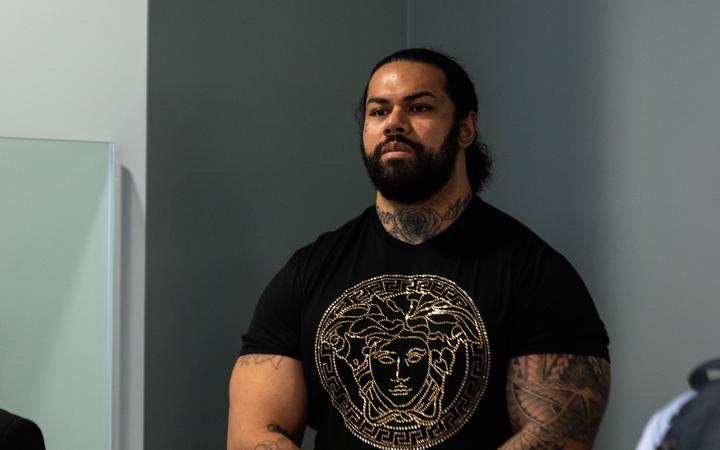 Pasilika Naufahu was amused that auditors were shocked how well companies linked to the Comancheros gang were being run, a court has heard. Photo: RNZ / Dan Cook

Five people are on trial, including the gang's local president Pasilika Naufahu, on money laundering, drug and organised crime charges. He and five others were arrested in April 2019 in a major police raid involving 80 officers. At the time luxury cars, property and a gold-plated motorbike were seized.

In one intercepted phone call played to the jury from August 2018, Naufahu can be heard being sceptical of the reasons the Inland Revenue Department audited a company that his co-defendant ran. He said the department wanted to look into some lump sum payments.

"They went through the computers, the emails, the paperwork," he can be heard saying. "We just wanted to play it cool... They said in six months we're gonna come again and do another audit," he said.

"They were so shocked everything was running proper [sic]," which he and a friend laughed about.

The Crown earlier claimed that same company, which cannot be named for legal reasons, was used to pay the Comancheros "pretend" salaries. In another call to a bank, played in court yesterday, Naufahu said he was paid $2200 a week - the equivalent of $114,000 a year - from the company for his role as a site manager.

In another call two weeks later, a lawyer Andrew Simpson, who's already been convicted of money laundering, said he didn't "push anything this week" because he knew an auditor was coming.

"I wanted to touch base and give you the heads up: I've had the auditors through," he hold an associate who can't be named. "I knew they were coming this week so I've sort of just held back doing anything... I didn't want to trigger anything significant."

The officer in charge of the investigation, Damian Espinosa, has produced photographic evidence of this man visiting the home of Pasilika Naufahu.

Simpson continued: "She was in this morning, she had a good look at everything, and she's ticked it all off... So if you feed it back to the boys and say 'look, Andrew's had the auditor through, and they've checked off everything, they're happy with everything's that happened so far'.

"I didn't push anything this week because I knew that she was coming in, so I didn't want to.. stir anything up."

The defence has not yet had its arguments heard. The trial continues on Monday.