The Department of Corrections information from June 2015 to the end of May this year reveals across that time, force against prisoners has increased by 150 percent. 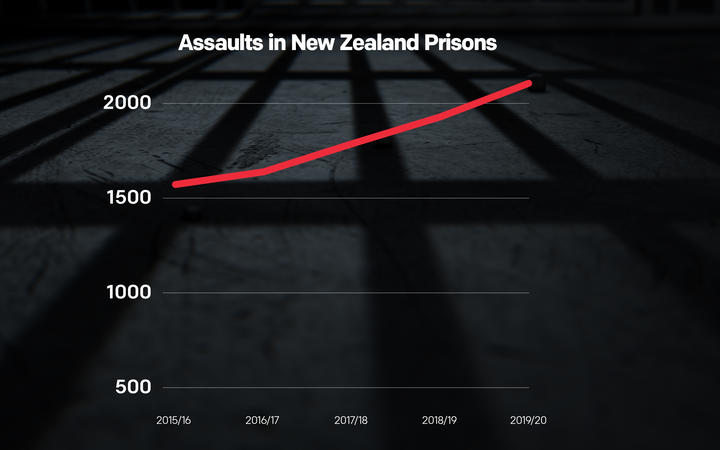 At the same time, the number of assaults has also been going up.

In the 2016 financial year there were only six recorded uses of pepper spray.

Last year, the cans were taken out by guards nearly 900 times.

All guards around the country have started carrying pepper spray cans on their hip. 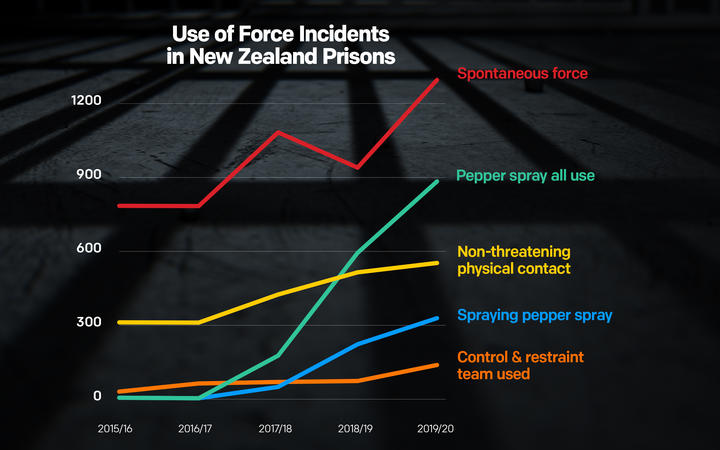 Staff had it available since 2011, but it was only used for planned events.

Hip cans were introduced in July 2017 and that practice was rolled out to all prisons within 17 months.

However, often just taking the can out is deemed to be enough to deter the prisoner.

In about 500 of those 900 events, the can was just shown as a threat and de-escalated the situation.

The Corrections Association - the union that represents front-line prison staff - told RNZ guards were given pepper spray because of more threats to their welfare.

Its president Alan Whitley said pepper spray was "a better means then using blunt force or grabbing a prisoner".

"The pepper spray also keeps the prisoner safe as well. What I mean by that is, if you've got a couple of prisoners fighting and you can't get them apart, you've got one prisoner that's beating on another prisoner you can use pepper spray on him to get him off him.

"It has enabled us not only to protect our staff but also intervene when prisoners are assaulting each other as well. [The statistics] speak for themselves."

Other force in the cell block

The most common use of force is spontaneous - when staff react to the situation right in front of them - and there are now more than 1000 incidents like that nation-wide a year.

They can include escape attempts or assaults. These can happen when staff answer personal alarms, radio messages or shout for assistance.

That has generally been increasing, minus a few falls, but not anywhere near like the rate in the pepper spray use increase. 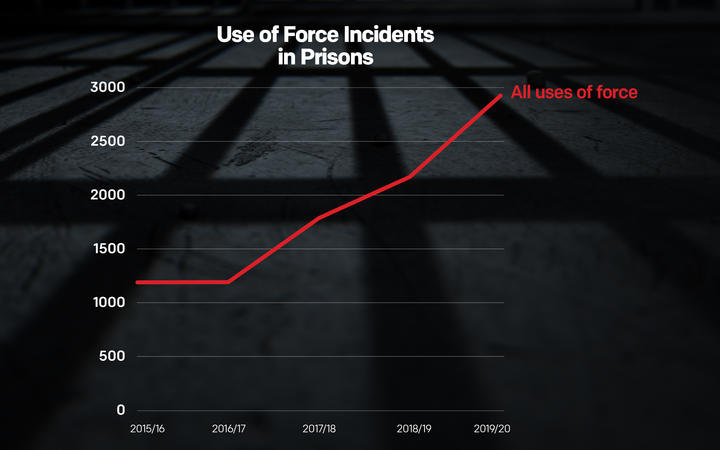 It could be assisting, ushering, guiding, steering or separating prisoners.

For the most serious incidents, guards might form what's called a control and restraint team - involving a group of four officers.

This approach is considered as a last resort and can involve a physical hold such as wrist locks or arm locks.

"It could be a prisoner who's barricaded himself in a cell and the prisoner's refusing to move and they've now got to relocate that prisoner," Whitley said.

"There could be damage in the cell, there's various reasons why you can't just simply leave prisoners in the cell to cool off, they need to move them out. It can be for the purposes of getting them to court as well if they're refusing to go."

The tactic has increased considerably in the last year from 74 in 2019 to 139 times to the year in June.

Mt Eden Corrections Facility guards used it the most out of any prison - 36 times last year.

Corrections staff say that could be because it is mostly a remand prison - where prisoners go while they are waiting for a court hearing.

Staff say remand prisoners are the most volatile because they are coming straight in from the street, might be coming down off drugs and they do not know the prison environment.

Mt Eden also has the highest prison population in the country, with over 1000 inmates.

Prison numbers have been declining in the last few years but that has not stopped a rise in assaults.

Corrections national commissioner Rachel Leota said of those inside, about 75 percent of prisoners are in for a violent crime.

"Gang members are identified as being disproportionately as responsible for assaults in prison," she said.

"It's the amount of violence that are in the crimes that are bringing people to prison that has seen the increase in attacks on staff members and other prisoners.

"Our lower end criminals aren't coming to jail now - they're doing community sentences. It's the top end of your offenders who are involved with crimes that have a high and severe level of violence in them."

Beales said violence issues are "magnified" in prisons and staff inevitably get caught up in it.

"When there's a problem between two gang members or there's an issue between rival gangs, or somebody believes somehow something has happened against one of their gang colleagues and an incident happens, it's our staff that have to get in between that."