Some secondary school principals want the government to change its alert level rules to ensure NCEA and Scholarship exams can go ahead during a lockdown. 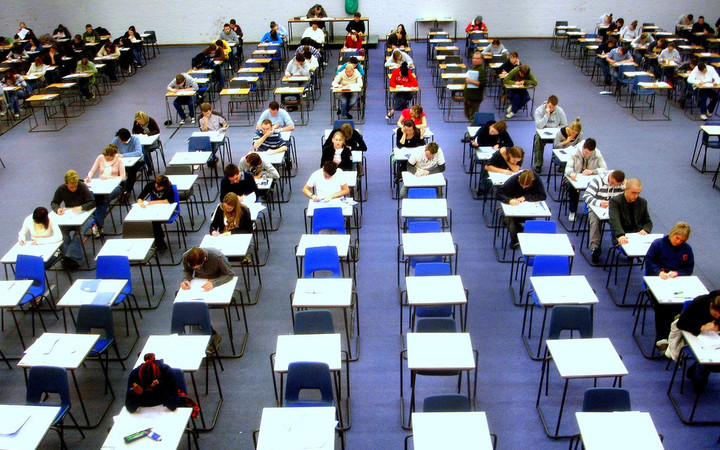 The Auckland Principals' Association wants the government to alter the alert level rules so exams can proceed even if there is a level 3 lockdown. Photo: Supplied

Students are worried the exams in November and December will be cancelled by a change in alert levels and that is creating stress.

Principals told RNZ the exams could run safely at level 3, though some also wanted the option of exempting students from exams regardless of alert levels.

The current rules mean students who could not attend an exam because of a lockdown would instead get a derived grade based on the work they had completed earlier in the year.

Students at Tawa College in Wellington said they were feeling the pressure to do well in case the grades they received now were needed to calculate derived grades.

"It's very scary because a lot of students don't take derived grades as seriously as they should," a Year 13 student said.

A Year 12 student said: "Knowing that externals might not be on makes me think I should put in the effort."

The principal of Tawa College, Murray Lucas, said he hoped there would not be another lockdown in November.

"I would like exams to go ahead if at all possible, but I would also like to say that the student and New Zealand's health are the most important things, so I actually don't believe in having exams at all costs," he said.

Lucas said schools needed to know if exams involving small numbers of students might be allowed, and what arrangements might be made for big exams in subjects like maths and English.

Auckland schools have now been through two lockdowns and the president of the Auckland Secondary Principals' Association, Steve Hargreaves, said they were planning for the possibility that some or all exams would be cancelled.

He said the government should alter the alert level rules so the exams could proceed even if there was a level 3 lockdown.

"We could run the exams under level 3, we would just need to relax some of those requirements around a bubble of 20 to a teacher. There's a lot of health and safety mechanisms that can be put in place - physical distancing, spacing the desks out, students wearing masks - that would give us a lot of confidence that we could run the exams safely under level 3," he said.

The Hawke's Bay Secondary Principals' Association said its members agreed exams should be allowed at level 3, though exams with large numbers of students might need to be spread between several rooms.

The association said it might also be possible to run only exams for NCEA levels 2-3 if there was a lockdown.

However, some Auckland principals wanted to be able to exempt students exempted from exams altogether.

The principal of Sir Edmund Hillary Collegiate Senior School, Kiri Turketo, said most of her students had not returned to class since the city's recently-completed level 3 lockdown, which she said had been especially disruptive in South Auckland.

"Covid-19 is at the doorsteps, it wasn't in lockdown 1, and the fear is prevalent, it's every day," she said.

Turketo said the Qualifications Authority should let schools decide whether to allow students to sit an exam or award a derived grade instead.

"Give us the choice to decide whether or not students can sit exams or that we take the very best of who they are and what they've done and decide with them, not for them," she said.

The president of the Post Primary Teachers' Association, Jack Boyle, said any changes should prioritise students who were in their final year of schooling.

He said exemptions or changes for NCEA level 1 exams were less important because the students sitting them were likely to return to school next year.

"We've really got to make sure we've got a way of mitigating the significant impact of perhaps not having an examination for a group of learners who are exiting," he said.

Principals doing 'whatever we can' to calm Covid fears

Auckland principals say they are doing everything possible to reassure families as low roll numbers gradually climb after the region's lockdown.

Safety concerns around Covid-19 were cited for a low turnout on Monday, most notably in South Auckland.

While numbers have improved, many schools remain well short of attracting a full roll.

Otahuhu College principal Neil Watson said just 45 percent of students were in the classrooms on the first day but by yesterday numbers had risen to 70 percent.

One of the key factors in numbers improving during the week was the decline in Covid-19 cases, Watson said. The school was hopeful senior students wouldn't go out and try and find jobs and it was working with families to ensure they realised the more time teens spent at school the better chance they had of earning qualifications that would help them in future.

With the latest outbreak centred in the Pacific community and his school having a majority of Pacific students, it had been a challenging time for students, their families and teachers.

"So we're working on being prepared for that in the future and working with our families. We've been surveying our families and seeing how we could do a better job of supporting their children on any future lockdowns."

Couillault said his school was following Ministry of Education protocols which involved extra cleaning, safe practice being talked about in the classroom, and the pastoral care team being mobilised to talk to families to get students back.

"We're doing whatever we can, bending over backwards to make it as easy as possible for students to come back to school from a re-engagement point-of-view, and once they're here, re-engaging in their learning, particularly if they're senior school to get that qualification for the next stage of their journey."