Strike action by about 3200 primary care nurses and administration staff yesterday affected about 500 GP clinics and accident and medical centres nationwide, forcing some to close for the day. 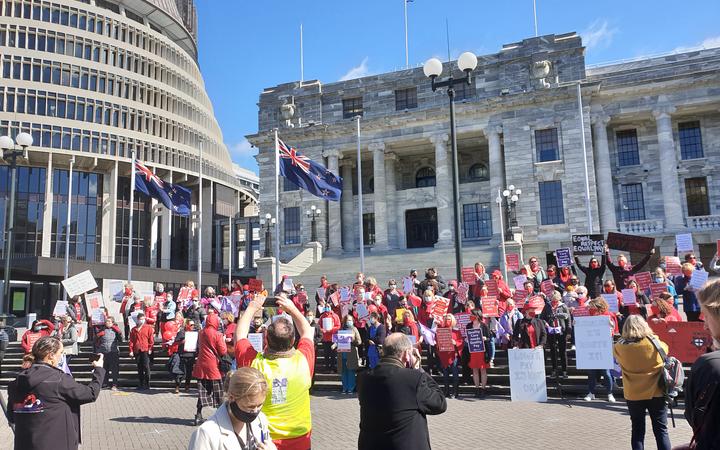 Hundreds of nurses and their supporters joined a lunch-time rally at Parliament calling on the government to step in. Photo: RNZ / Ruth Hill

Hundreds of nurses and their supporters joined lunch-time rallies at Parliament and in Christchurch, calling on the government to step in after mediation with employers failed.

Nurses Organisation spokesperson Suzanne Rolls, who was at the protest outside the Beehive, said talks with employers have dragged on all year but only the government had the power to end the stalemate.

"We've worked it out to be about $15 million and that will enable our members to get parity with our other members in district health boards." 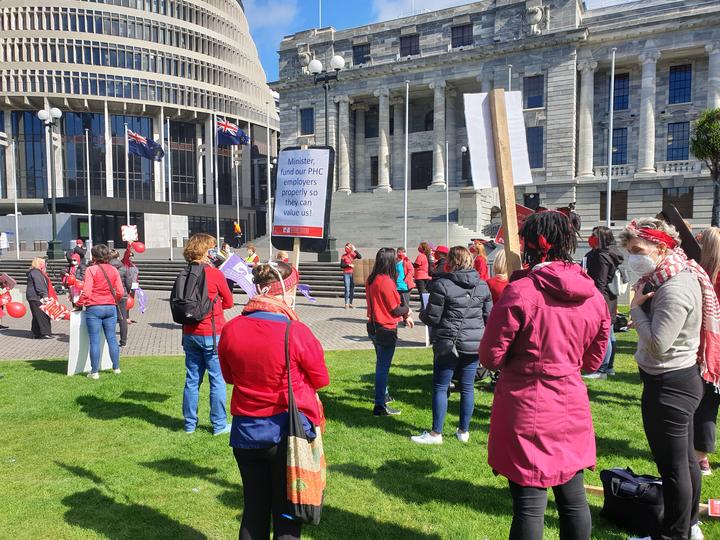 It was not fair that nurses working in primary care were paid 10 percent less than those working in hospitals, she said.

While some clinics were giving their staff pay parity, not every clinic could afford it.

"We're going to see more issues around retention in the coming years."

Former DHB nurse Jude Kearns said it was not fair that nurses with the same qualifications and experience were paid more than $7000 a year less in some cases.

"I worked at Capital and Coast for 29 years and at other major hospitals, and I would say that out in general practice we work harder than hospital nurses.

"We're paid so much less and we work so much harder." 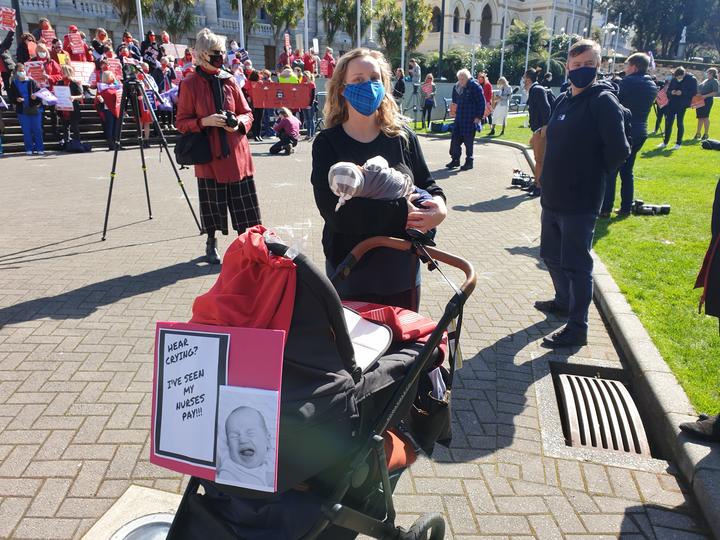 Georgia Choveaux and her son, Josef, who is nearly six weeks old, joined the rally to show her support for nurses in primary care. Photo: RNZ / Ruth Hill

The senior doctors' union is throwing its support behind the nurses.

Association of Salaried Medical Specialists executive director Sarah Dalton, who joined the picket line at Parliament yesterday, said the financial problems at Canterbury District Health Board and the fact many rural and iwi based practices could not make ends meet showed it was time for a national conversation about health funding.

"It doesn't matter where you work, which healthcare setting, you deserve to have decent pay and conditions and it's patently unjust that if you choose to work in a community setting you're going to be paid worse than your colleagues who are working in a hospital.

"We need all those kinds of healthcare."

Georgia Choveaux brought her six-week-old son Josef to the protest.

"As a new parent, making sure me and my son have great access to community health and wellbeing is really important, and I know that the nurses aren't paid enough to keep us well."