A second survivor of the livestock vessel that disappeared in the East China Sea has died. 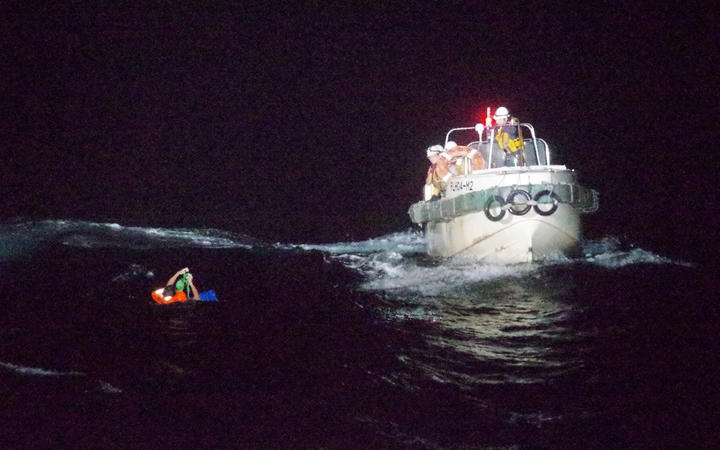 A Filipino crew member believed to be onboard Gulf Livestock 1 is rescued by a Japan Coast Guard boat during their search and rescue operation in the East China Sea. Photo: Japan Coast Guard/Reuters

Dozens of dead cows have been found off the East China Coast where the search for a missing ship carrying dozens of crew - including two New Zealanders - is underway.

The Japanese Coastguard said a man was found by a patrol boat drifting face down in the water and unconscious.

But he was pronounced dead some time later.

The coastguard said weather and sea conditions at the time of rescue were cloudy, light winds and a swell of two-metres.

The Gulf Livestock 1 has been missing now for more than 48 hours off the coast of Japan with 43 people on board, including two New Zealanders and two Australians.

It left Napier's port with more than 5800 cattle on 14 August headed to the Port of Jingtang in Tangshan, China, and was expected to arrive 17 days from its departure.

The Japanese Coast Guard will search for four days for survivors until Sunday when another typhoon is due to hit the area.

It will decide whether to resume once the typhoon has passed.

Strong winds and torrential rains from Typhoon Masak, the first one, are hampering the search effort.

The ship's Filipino chief officer was rescued by Japan's Coast Guard and says the ship lost engine power, then capsized after being hit by a large wave. 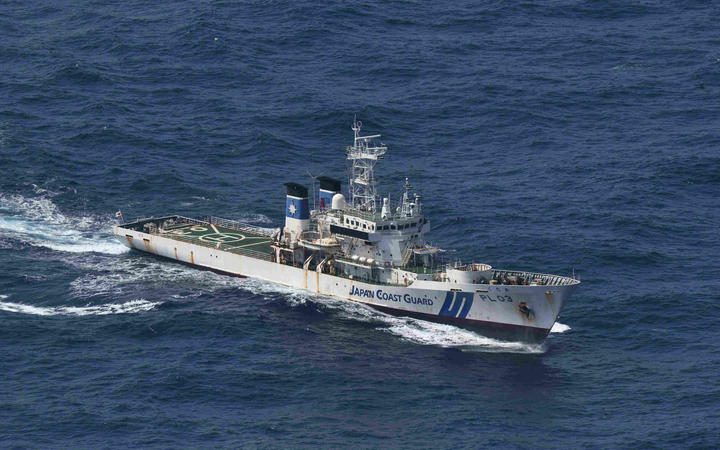 In a statement, Australasian Global Exports has confirmed it employs four of the people on board.

The Melbourne-based export company said it was in contact with the families of the missing workers.

"Four of those people are treasured friends and work colleagues. The remaining people on board are engaged by the ship's owner.

"We are in full contact with the families of our four colleagues and are offering them all the support we can.

"Our thoughts and prayers are also with the ship's officers, crew and other personnel and their families."

Both Australia and New Zealand said they were providing consular assistance to the families of their crew members.

A Queensland vet is believed to be one of the two Australians missing onboard.

Minister of Foreign Affairs and Trade Winston Peters said not a lot was known at this stage, but it was a sad situation for the families.

He told Morning Report news of another typhoon only added to the worries.

"It's just adding to the problem and at this point in time it's building up, and we can't be certain at all about our capacity to put assets in their to do the job they're trying to do.

"This is a serious disaster with so many lives at stake, we hoped for something better but it's not a good situation at all."

Peters said he could not disclose any identifying information about the missing New Zealanders, but they had been in touch with the families.

"This is a matter of seeing whether they are rescuable, and ensuring the family knows first either way."

Following the incident yesterday, the Ministry for Primary Industries temporarily suspended consideration of cattle livestock export applications. But Peters said a complete halt on cattle exports in the future was not the answer.

"If it was not for livestock exports, this country would have no farming industry at all. The question is that we do in a way that safe and humane in respect to the animals and the people who do it. In this case we seem to have had a perfect storm."

Bill Sweeny from NZ Farmers Livestock said the company had recently supplied cattle to Australasian Global Exports and some of these cattle were on board the ship.

He said the possible loss of human life was tragic.

"I can't remember in all my years - I've been 40 years in the industry - hearing of a livestock ship sinking and claiming lives... it's quite exceptional."

He said the government would have to be careful around the halting of live cattle exports because contracts had been signed.

"The ramifications for the farmers are huge. We've got a situation now where we've got literally hundreds and hundreds of cattle sitting in quarantine that have now been all mixed with cattle from all round New Zealand.

Farmers might refuse to take them back on biosecurity grounds and if they were forced to sell them "the hit would be massive".

"Not something the industry is used to by any stretch of the imagination. This is very clearly an exceptional event, it's a tragedy if our worst fears are confirmed."

The incident comes as the government is reviewing the practice - a move triggered last year when New Zealand and Australian cattle being exported to Sri Lanka died.

Options being considered range from improving current systems to a total ban on livestock exports.

Animal activist group SAFE campaign manager Marianne Macdonald is calling on the the minister to publish the review before the election.

"Damien O'Connor is yet to signal where the government stands on live export and people deserve to know."

According to SAFE, there are two other live export shipments in the typhoon-affected area, including the Yangtze Harmony which left Port Taranaki on 19 August carrying 5700 cows.

"This is a human and animal welfare disaster. Our thoughts are with the families who are missing their loved ones, but we have to recognise the risk to animals that the live export trade brings.

Past troubles come to surface

The Gulf Livestock 1 is a 139m, Panamanian-flagged cargo vessel built in 2002.

According to Baird Maritime, the Philippine Navy had helped the vessel in July this year when it suffered an engine breakdown near its maritime boundary.

It had reportedly been undergoing sea trials at the time. After repairs, it headed towards Australia.

In May last year, Australian authorities held the vessel back for a week because of navigation and stability problems.

A former seafarer said it would have been a sitting duck when its engine failed in the middle of a typhoon.

According to the Japanese coastguard, the man rescued is one of the Filipino crew, who said the ship's engine failed before it capsized after being hit by a wave.

Eduardo Sareno, the vessel's 45-year-old chief officer, said the crew had been instructed to put on lifejackets and that he jumped into the water.

He said he did not see any other crew members before he was rescued.

Sareno's wife told the BBC he'd spoken to her from a hospital telling her he was safe.

The Philippine department of foreign affairs said its consulate in the Japanese city of Osaka was "monitoring the situation and co-ordinating" with authorities.

Liezel Pitogo, 38, last spoke to her husband Lindon, a seafarer on the ship, on Tuesday evening.

He said they were travelling to China but were a bit worried about the weather, she told the BBC, speaking from Quezon province in the Philippines.

"His phone was unreachable on Wednesday," Pitogo said. "I thought it's just a problem with the erratic signal when they are on the sea but I saw a Facebook post from a seaman's wife about a cargo ship that went missing so I started contacting and asking some of the other wives."

How powerful is the typhoon?

After moving through the East China Sea, Typhoon Maysak, named after a Cambodian tree, made landfall early on Thursday in the South Korean port city of Busan, packing winds of 140km/h.

At least two people are reported to have been killed in the city. One was a woman whose apartment window was shattered by the force of the wind.

Another man in Busan was believed to have fallen to his death from the roof of his house. Yonhap news agency reported he had been repairing a leak.

More than 2200 people have been evacuated to shelters and about 120,000 homes were left without power in the affected region. Wind and rain have flooded Busan's streets.

Flights have been cancelled and ferries suspended. Maysak is one of the strongest storms to hit the region in years. It is moving north and made a second landfall at Kimchaek in North Korea, before weakening as it tracked into north-east China.

The storm comes after the Korean peninsula suffered a summer of monsoons and widespread flooding. Another typhoon - Haishen - is forming south of Japan and is due to hit the Korean coast on Monday.