Four firefighting teams and a command unit will stay overnight at the scene of a large scrub fire in the Mackenzie Basin, in the hope of saving any property in its path. 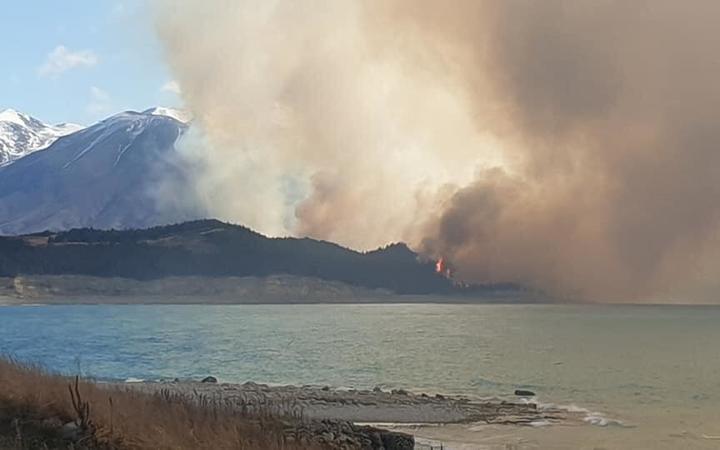 Fire and Emergency was called to the blaze in grass at Mount Cook Road towards the Dusky Trail at about 11.30am. During the day it jumped to the east of the highway, and by 9pm had spread into about 2000 hectares of scrub and forestry.

Fire and Emergency said the fire was not under control and strong winds have hampered efforts today.

Attempts to save a nearby building were abandoned earlier today, but a local fire crew will stay at the scene overnight in the hope of saving any other property in its path.

Fire and emergency said the blaze was expected to remain on the western side of State Highway 8, and it didn't pose a risk to the Twizel or Mount Cook townships - which wasn't expected to change.

Police have guided a convoy of 54 cars from the village and said all evactuations had been voluntary, but no more can leave by road tonight.

During the day 14 helicopters and two fixed winged aircraft were battling the flames, but they have halted work overnight, and were expected to resume at first light.

One person was earlier treated for minor injuries.

MetService said the fire was "a reasonable size" as it could be seen from their satellites 36,000 kilometres above earth.

The scrub fire burning at the southern end of Lake Pukaki is just about visible from 36,000km above the Earth. ^RK pic.twitter.com/6CwWe0ORif

A spokesperson from Lakestone Lodge in Twizel, which is about five kilometres from the fire, described it as horrific.

This afternoon they said they could see a large number of helicopters battling hard through the wind to put it out.

Glentanner Holiday Park on State Highway 80 is about 15 kilometres from the fire.

Its manager, Sara Kennedy, said there was no feeling they were in danger, but only around 10 guests were left at the park from what was 65 earlier today.

"The police turned up at about 4.30pm and suggested they join a convoy to leave Mt Cook area, and most of our guests took that, because it's the safest option of course, and left," she said.

Kylie Hogan, acting general manager of the Hermitage Hotel in Mt Cook village, said they were safe there, and have been helping to provide updates.

"It's been about just being that go-to [source] and making sure that we've got that up-to-date information that we can pass through to travellers, in-house guests and any visitors we get into the facility ... so they can be aware of what's happening further on down the road."

She said some guests who had booked for the night were now unable to get to the hotel.